The parliament of Iraq approved the new Constitution specifying the federative structure of the war-torn country on Sunday. Representatives of the Sunnite community refused to sign the document claiming that the federative organization would eventually make the country collapse. Demonstrations of protest took place in Sunnite-populated provinces of Iraq, in which people took to the streets to protest against the passing of the basic law. It seems that Iraq is about to deal with another outburst of clashes between Shiites and Kurds on the one hand and Sunnis on the other hand. It would be logic to surmise that US troops will definitely be involved in future conflicts. 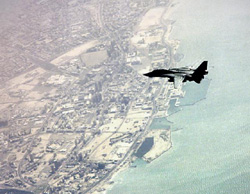 The constitution was passed under solemn circumstances. Shiite and Kurd deputies unanimously approved the document, whereas deputies from the Sunnite community, which used to rule the nation during Saddam Hussein's regime, refused to sign the document. They stated that the division of the country into three federative districts - the Shiite, Sunnite and Kurd areas – will split up Iraq. Sunnites have already addressed to the League of Arab States and the UN. Anti-constitutional demonstrations swept across the country's Sunnite regions; many of the demonstrators were carrying Saddam Hussein's photographs and posters.

The Iraqi nation will go to the polls on October 15 to participate in the constitution referendum. According to recent opinion polls, the majority of Iraqi citizens hardly have any notion of what is written in the text of the constitution. Those who can already determine their views on the matter will most likely vote against it. Sunnis and a part of Shiites fear that the federalization will split up the country into three independent religious states. Another part of Shiites have not determined their position on the matter, although Kurds are ready to say yes for the constitution, hoping to create their own state.

Despite all difficulties that accompany the approval of the constitution, US President George W. Bush welcomed its signing. The American president expressed disappointment that the Sunnis did not sign on, but pinned his hopes on the referendum. If two-thirds vote against the constitution in three provinces, it will be enough to turn the constitution down. Sunnis comprise the majority in four provinces, a lot of Shiites are ready to say no too, and the probability of a failure is rather large.

Specialists are certain that Iraq is likely to split as a result of the voting. Georgy Mirsky from the Institute of World Economics and International Relations wrote in one of his articles that Iraq could be described as an artificial establishment. Its entire territory used to be a part of the Ottoman Empire before the beginning of the 20th century, albeit not as a single whole, but as three provinces: the Shiite Basra, the Sunnite Baghdad and the Kurd Mosul. The territory became the protectorate of Great Britain afterwards, which united the three different national units into one state called Iraq.

Monarchy, which originally appeared in the new country, was later substituted with the Ba'ath regime established by the Arab National Socialist Party. Saddam Hussein came to power in 1979, and Sunnis took all key positions in the country. The Kurdish and Shiite separatism has always existed, although their activities were subdued with the use of chemical weapons in 1988 and 1991. Saddam, however, granted an official status to the Kurdish language, whereas the Arabic remained the state language of the country.

It is generally believed that Shiites make up approximately 55 percent of the Iraqi population with Sunnis and Kurds sharing 20 percent, and other nations comprising only five percent. Each of these nations misinterprets the population statistics to their own benefit. As a result, Sunnis and Shiites consider themselves the legal contenders for the right to rule the nation. However, there are external forces behind each of those communities. Al-Qaeda enjoys a certain popularity with Sunnis, whereas Iran openly stands for Shiites. Needless to say that the two external factors can be referred to as the USA's enemy No.1.

The situation is much more difficult with the Kurds, though. They have been dreaming to create their own state in the north of Iraq, south-east of Turkey, north-west of Iran and north-east of Syria. Turkey, however, which has been waging war with Kurdistan's Workers' Party for decades already, vehemently rejects the possibility for the Kurdish authority to be created. Expert Georgy Mirsky said in an interview with the Vremya Novostei newspaper that Turkish troops would try to immediately occupy the new establishment in the event Kurds tried to create it.

Saddam Hussein managed to suspend those conflicts, although the USA's incursion in Iraq breathed new life in them. Coalition states offer help to Turkey to struggle against the Kurdish separatism, but they also promised autonomy to the Kurdish-populated north of Iraq. If the power in Iraq goes to Shiites, Iran will have an opportunity to strengthen its influence there, although the Sunni government will take the nation back to Saddam's era. The question of the Iraqi constitution has seemingly aggravated the ongoing opposition. The USA and its allies can give Iraq nothing but elevated declarations of democracy.