When China abolished the yuan-dollar peg, it was only a decision of political character

The recent decision of Chinese authorities to liberalize the national currency was about to be referred to as an event of historical significance. The yuan has been fixed on the level of 8.28 yuans per dollar for more than ten years. The Chinese economy was developing extremely fast during those years, while the US dollar was suffering a global demise. As a result, the official rate of the Chinese currency turned out to be underestimated (up to 40 percent, according to various estimates), which gave incredible competitive advantage to Chinese producers on foreign markets. 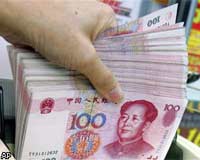 The combination of the undervalued yuan and the cheap labor force allowed China to inundate the entire world with made- in-China goods, which include electronic equipment, textile products, cars and mass consumption goods. It is noteworthy that the sweepingly developing national export helped China win the foreign trade balance with the USA and the EU.

The developed nations started showing a very strong diplomatic pressure on China with a view to make Beijing abolish the yuan-dollar peg. World's most developed superpowers have succeeded: after a series of international scandals China announced the adoption of the floating rate for the national currency on July 21. However, the generous decision of the Chinese government virtually turned out to be an indulgent sop for the rest of the world.

At first, the Central Bank of China let the Chinese currency grow by 2.11 percent to the level of 8.11 yuans per one US dollar. That was the progress, which inspired the world community. In addition, the Chinese Central Bank said that there would be special restrictions set up for the yuan to regulate fluctuations by 0.3 percent a day.

However, it becomes obvious nowadays that it was just a political maneuver. “The 2.1 percent revaluation of the yuan is more of a political decision,” a senior analyst with Veles Capital investment corporation, Ivan Manayenko said. “The financial authorities of China will be trying to analyze and estimate what they can and cannot do,” the specialist told Pravda.Ru. “The first message about the revaluation mentions the currency corridor of 0.3 percent. It is still unclear, what kind of a corridor it is exactly and how it works. Restrictions will most likely be effected on the base of the new rate, which appears after the revaluation,” the specialist believes.

According to Manayenko, Chinese officials said about a week after the revaluation that China was not going to change anything in its financial policy. Such statements prove that the revaluation was just a test, and that the yuan will continue to fluctuate. ”Even the five-percent revaluation, which is planned for this year, is actually nothing,” the analyst concluded.

It will be nothing indeed in comparison with the expected 40 percent growth of the Chinese currency, which would bring it closer to the fair rate. It is noteworthy that the five-percent growth of the Chinese currency in 2005 is an optimistic forecast. The government of China will let the yuan grow by at least one or two percent, the well-known American billionaire and financier, George Soros believes.

Sergei Tsiplakov, a Russian commercial representative in China, said in an interview with Interfax that the yuan would probably grow by four or five percent until the end of the year. Mr. Tsiplakov is certain that the external political pressure was not the decisive factor in China's decision to liberalize the national currency market. “It is internal economic aspects, but not the external pressure, which made the Chinese administration reform the currency rate, I believe,” said he. “The yuan revaluation is an attempt to slow down the growth of production in export-oriented industrial branches and cut the speed of the economic development in general,” the commercial representative believes.

The sweepingly developing Chinese economy has already become a problem for China. “The GDP growth remained on the level of 9.5 percent, the industrial production gained 16.4 percent, investments dropped by only 3.9 percent and made up 25.4 percent. Consequently, the measures, which the Chinese government took to ease the economic growth, have not brought the desired results,” Mr. Tsiplakov said.

One may conclude that China continues following the course, which is profitable only for its national and external policy, despite the external pressure. The heated haggling process between the West and China ended with a fine checkmate on the part of the latter. No one will be able to reproach China for running non-market financial policies. However, the Chinese administration has preserved its national competitive advantages to be able to handle current problems, which particularly include excessive investments – the factor that European and American economies would only consider a blessing.