Yesterday a six-way summit took place in Moscow over the Iranian nuclear problem. Deputy heads of the foreign policy agencies of Great Britain, France, Germany, USA and China arrived in the Russian capital to take part in the event. Russia was represented by the Deputy Foreign Minister Sergei Kislyak. The American delegation was headed by Under Secretary of State Nicholas Burns, while John Sawyers headed the British delegation. Michael Scheffer and Stanislas de Laboule represented Germany and France respectively. From China aide to the foreign minister Qui Tyankai who arrived in Moscow straight from Teheran took part in the summit. 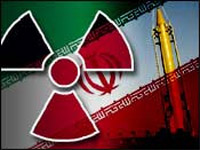 The summit took place against the background of a clear escalation of the situation surrounding Iran’s nuclear programme. Last week Teheran announced that Iranian scientists had managed to independently obtain low-enriched uranium, and declared itself to be a new member of the “club of nuclear powers”. Iran stresses that it is acting with peaceful aims, but the international community is becoming increasingly dubious.

Iran recently carried out large-scale military exercises during which it tested its new ballistic missile “Fajr-3”, which is meant to be invisible to radar. The West suspects that Teheran is developing a missile program so that the missiles can carry nuclear weapons. IAEA inspectors currently working in Iran have still not found any evidence that Iran has really reached the level of low-enriched uranium. On Friday a new group of inspectors will arrive there, headed by the IAEA Deputy Director General Olli Heinonen.

All the participants at the Moscow consultations spoke out against Iran’s transformation into a “nuclear power”. However they do not agree on how this should be achieved. Russia and China are opposed to the introduction of sanctions, as they think that the opportunities to resolve the situation through diplomatic means have not yet been exhausted. “We are convinced that it is impossible to ease the international community’s concern over Iran through methods involving force or sanctions,” said the official representative of the Russian Foreign Ministry Mikhail Kamynin on the day before the summit. Qui Tyankai noted that, “the best option for solving the Iranian problem is through diplomatic efforts which are acceptable to all concerned”.

Iran should “halt” its uranium enrichment programme, as this would be the best way for it to gain the trust of the international community, thinks the Russian Foreign Ministry. Moscow still hopes that Iran will comply with the UN’s demand and that the moratorium on enriching uranium will come back into force until 28th April. On this day the head of the IAEA is meant to inform the members of the UN Security Council on the results of the inspection of Iranian nuclear facilities.

Washington is more harshly disposed. The White House thinks that taking “decisive measures”, such as partial or total sanctions, could persuade Iran to abandon their nuclear developments. The Americans are examining scenarios for using force to solve the Iranian problem. Yesterday George Bush again refused to rule out this possibility, declaring that “all options are still possible”. However Mr. Bush stressed thar the USA “intends to resolve this question by diplomatic means” and “to work intensively to achieve this”. The US President also noted the need for countries “which are aware of the danger that an Iran possessing nuclear weapons represents” to combine their efforts.

The Iranian side met the Moscow consultations with approval. The Iranian ambassador in Moscow Golyamreza Ansari expressed his “gratitude to those countries which are looking to solve this problem”. He especially noted the role played by Russia, which is “trying extremely hard to settle this question within the framework of the IAEA”.

However, judging by the leadership’s declarations, Iran is ready for military action from America. President Ahmadinejad promised to “cut off the hands of any aggressor” and assured the world that Iran’s enemies “will be disgraced”. “The powerful army of the Islamic Republic of Iran serves peace and security and is of no threat to anyone. But when confronted by an enemy it will react like a meteor,” he said at celebrations for Iran’s Day of the Armed Forces. At the same time the former president of Iran Ali Rafsanjani remarked that a military conflict “is not in the interests of the USA and of course is not in the interests of Iran and the entire region”.