The Prosecutor General of Ukraine, Svyatoslav Piskun, confessed in his interview with the Financial Times that Kiev had sold 18 strategic X-55 air-to-surface cruise missiles to Beijing and Tehran in 2001. It is worth mentioning that the missiles aere capable of carrying nuclear warheads. The Ukrainian deal roughly violated the treaty about the non-proliferation of missile technologies. 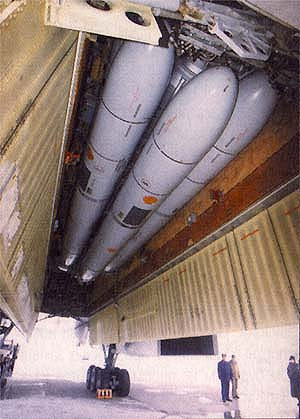 The agreement to sell 18 nukes to China and Iran was fraudulently arranged by official Ukrainian departments, such as the Defense Ministry and the Security Service. It was revealed as a result of the investigation that the missile deal was based on a fabricated contract with the Russian state-owned defense corporation Rosvooruzhenie (Russian Arms). The document was legalized, but there was no name or even signature of a responsible person stated on the document. Vladimir Yevdokimov, the director of the Ukrainian arms export company Ukraviazakaz, turned out to be the only defendant on the case, which was filed in February 1st, 2004.

Yevdokimov's lawyer, Bogdan Ferenz, is trying to make the matter look like a trivial shady deal. All the missiles, which had been sold to China and Iran, were expired, the lawyer believes. In addition, Bogdan Ferenz is certain that the missiles had been stored under terrible conditions, which turned them into scrap metal.

”According to international agreements, the missiles should have been either sold to Russia or destroyed,” Ukrainian deputy Grigori Omelchenko said. “They destroyed model missiles, drew up acts of missile destruction, which were subsequently kept at Defense Ministry's warehouses. President Leonid Kuchma was informed about it personally,” the deputy said.

The Foreign Ministry of Ukraine said that the missile case had nothing to do with the incumbent Ukrainian administration. The US embassy in Kiev, however, set out its concerns about the situation. The above-mentioned deal resulted in what Washington was afraid of most: China and Iran got hold of the up-to-date strategic weapon. The Russian strategic bomber plane Tu-160 is armed with X-55 missiles. The range ability of the missile is about 3,000 kilometers. It is capable of flying at low altitudes, which makes it hard to be intercepted.

Neither Beijing nor Tehran possess digital maps of the area, on which X-55 missiles can reach their targets. The two countries do not have the carrier for them either. However, Tu-95MC and Tu-22M2 strategic bomber planes are said to take part in the forthcoming joint Russian-Chinese military exercise in August-September. The Air Force Commander-in-Chief, Vladimir Mikhailov, said that the planes would be used in the exercise with a possible commercial perspective.