US budget to benefit Colombia and the opposition in Venezuela 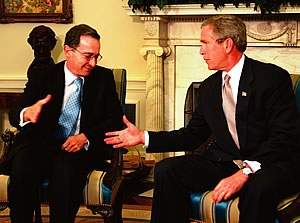 The US budget for the 2006 fiscal year, presented to Congress by President George W Bush on 7 February tells a lot about Washington policy in Latin America.

The US budget for the 2006 fiscal year, presented to Congress by President George W. Bush on 7 February, introduces significant moves in respect of Washington policy in Latin America. Even when figures show a major shuffling of money from some accounts to others in most of US foreign programs, allocations in Latin America are of key political relevance.

As a whole, traditional programs in Latin America will be squeezed because they do not fall into categories that are getting proposed increases. At the same time more money will be pumped into countries on the front line of terrorism, such as Pakistan and Afghanistan.

However, while cuts will hit some countries, important amounts of money will be dropped into others, in a move that could seriously affect regional stability, according to analysts.

According to the proposal presented by President Bush, cuts were included in anti-drug cash for Bolivia, Ecuador and Peru while part of this money will be allocated in Colombia. The official explanation reads that the US is switching the focus of its anti-drug effort from eradication programmes, which take place on the ground, to air tracking and interception.

So, as Bolivia and Peru are mainly production areas, while Colombia is a major drugs dealing country, efforts will be focused in the latter. What the official explanation does not say is that the move will mean that 63% of the anti-drugs budget for the Andean countries will now go to Colombia where it will be managed by US forces stationed there.

Once in Colombia and in hands of US forces, it is not possible to further track the money, which could be use to train Colombia’s military. That could affect even further the balance of power in the region.

Simultaneously, the 2006 budget stipulates a boost in the US support for opposition political parties in neighbouring Venezuela. Colombia and Venezuela were “at risk of war”, according to Caracas, in the last month and disputes between countries are far from over. Recently, Colombia's conservative President Alvaro Uribe failed to attend to a summit with his Venezuelan leftist counterpart, Hugo Chavez, aimed to ease a conflict triggered by the illegal capture of a Colombian rebel in Venezuela's capital.

The situation between both neighbouring South American nations is too delicate, indeed, and the game Washington is playing there is risky.

Altogether, about US$1bn of US government money will be spent in Latin America, but programs have not been agreed with its beneficiaries. Of course, Venezuela would not accept a foreign country funding its political parties, while Bolivia, Peru and Ecuador cannot willingly accept sudden cuts in programs with which they have been committed for a number of years. That is what the US call “foreign aid”.