It is the first time both heads of state see each other since Bush became reelected early this month.

Escorted by an impressive guard, Russian President Vladimir Putin moved from the Crown Plaza Hotel where he is staying with his high level delegation in the center of Chile's Capital to meet US President George W. Bush at his hotel also in Santiago. Both leaders held on Saturday their first meeting since Bush was reelected in November elections. 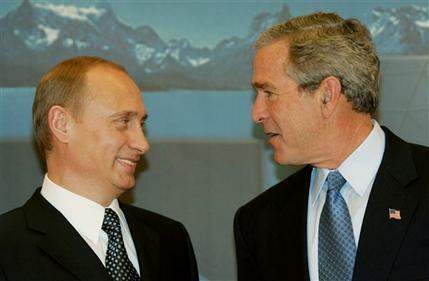 The meeting began by 7pm Moscow time, with the presence of resigned US Foreign Minister, Colin Powell and his Russian counterpart, Sergey Lavrov. According to sources in Santiago, the agenda included talks about the current situation in Iraq, Iran's nuclear program, anti-terrorism bilateral cooperation and trade issues. Putin had expressed on Friday that he stands for a multilateral commission to ease the situation in Iraq.

High on the agenda were the discussions about how to persuade North Korea to back away from its nuclear ambitions. President Bush is particularly concerned on this hot spot, as held similar talks on this issue with China, Japan and South Korea. After the meeting with China's Hu Jintao, Bush predicted North Korea “will hear a common voice” from the group of countries demanding it stop nuclear weapons program.

South Korea had early praised for a joint international action to bring North Korea back to the negotiations table. Seoul's officials present at the APEC summit here in Santiago, have expressed their optimism about a new approach now that Bush has obtained his reelections.

Iran will also hear a voice

According to several sources in Santiago, US President George W. Bush may have tried to persuade Russia's Putin to stop sending nuclear materials to Iran. Bush may have even quoted intelligence reports saying Iran is processing enriched uranium. "It is very important for the Iran government to hear that we are concerned about their desires and we're concerned about reports that show that before a certain international meeting they're willing to speed up the processing of materials that could lead to a nuclear weapon," Bush said before meeting Putin. All over the day, Russia's delegation kept silence over this issue.

“Our position has not changed”

On Friday, Presidents Putin and Ricardo Lagos of Chile signed a joint communique which emphasizes the need to reform the United Nations in order to make it better equipped to cope with the threats and challenges of the 21st century. The two leaders also stressed the necessity of strengthening the Nuclear Non-Proliferation Treaty as the universally recognized cornerstone of the international non-proliferation regime.

In declarations to the press, Putin said that Russia's position on Iraq “has not changed”, as insisted with a multilateral approach on the issue. Both leaders had also welcomed the coming into force of the Kyoto Protocol, thanks to its recent ratification by the Russian Parliament.

On Sunday, President Putin will meet Japanese Prime Minister Jonichiro Koizumi and Mexican President Vicente Fox. Japanese sources could not confirmed PRAVDA.Ru whether leaders would discuss over the status of the Kuril Islands. However, a spokesman of Tokyo's Foreign Ministry said Japan position over the issue is to acknowledge the legal occupation of the Islands by the Soviet Union and subsequently, by the Russian Federation.

High level bilateral meetings overshadowed the inauguration of APEC Leader's Summit. Leaders from the 21 countries will discuss until Sunday a further advance to the sealing of a free trade agreement in the Pacific area, as well as new ways of cooperation to fight terrorism and corruption.

President Putin arrived early in the afternoon at “Escpacio Riesco” Convention Center in the outskirts of Santiago. There, leaders informally discussed with top businessmen from multinational companies about trade issues. By the evening, Chilean President Ricardo Lagos greeted guests with a typical meal at a cultural center in Santiago.

Photo: Putin meets Bush at a hotel in Santiago