Russian male cat lives for 18 years without any females

”There is no special secret for my cat's longevity. He eats sprats and drinks milk. He has never been out of my apartment. He has never been with a female cat either. He may probably be living for so long because we have been trying to improve his immune system since his first days of life,” the owner of the long-living cat, Lyudmila Urban said. 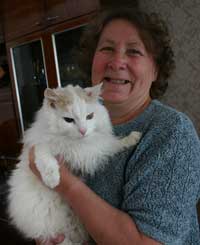 The cat became a pet with the family of Lyudmila Urban by accident: the woman's daughter brought the little kitten home from school. The kitten was called Tosha: it was a tiny fluffy being. The kitten was sick – it could not eat any food. Lyudmila took the kitten to a veterinary hospital, where vets tired to feed Tosha with milk formula. The whole family were doing their best to save the little kitten from death, and Tosha was lucky to stay alive.

The kitten gradually recovered from his feebleness and grew into a beautiful domestic animal. Tosha is a white-colored, spotted cat with big dark-brown eyes. When Tosha was three, his owners decided to exhibit him at a local cat show. Specialists of the show told Lyudmila that she was owning not a outbred street-born cat, but a genuine Siberian feline. Tosha was even awarded a diploma.

”Every winter he grows very thick fur around his neck, which makes him look like a small lion,” Lyudmila Urban said. In spite of the fact that Tosha was growing in the company of caring humans, he never exercised his own cat gratitude in return. He lets the people stroke him only when he is in the mood for it. In addition, Tosha never purrs. The cat was friends with another family member – terrier Dina. The dog and the cat would spend all of their time together. When the dog died, Tosha could hardly handle the loss of his animal friend and gave way to depression. After that, the cat had to experience another serious stress, when the Urbans family had to move into another apartment.

”We thought that he would die. He would always lie down motionless in his box. My husband said that we should put the cat down to save him from tortures, but I never agreed. Tosha luckily survived the stresses, although one of his eyes stopped showing any reactions to light,” Lyudmila Urban said.

The long-living cat is fine now. Tosha became a lot more affectionate to his owners and even learned how to purr.

A veterinary specialist, Olga Enina, said that she was very surprised to know about the 18-year-old cat: “It is simply astonishing! Cats usually live for 10 or 14 years maximum in Russia's weather and ecological conditions. I've heard some stories telling of 20-year-old cats, but I never encountered one in my practice,” the doctor said.

A tragic accident occurred with another old cat on July 6th in Moscow. Emergency services received a call late at night from a woman named Natalia Kochergina. The woman said that she had been brutally attacked by her pet cat. The black and white female cat, named as Marusya, was living with her owner for ten years. Marusya was not a gentle cat, but she honored and respected her owner. One night the cat attacked the woman for no particular reason and jumped into Natalia's face. The woman covered the face with her hands, but the cat bit them brutally till they started bleeding. After that the cat started biting her owner's feet.

The frightened woman managed to kick the cat aside and lock the animal in another room. When rescuers arrived, they took the furious cat to the nearest vet hospital, where the animal was put down.