Actress Charlize Theron has been honoured with the Vanguard Award at the 17th Gay and Lesbian Alliance Against Defamation (GLAAD) Media Awards at the Kodak Theatre in Los Angeles for increasing "visibility and understanding in the lesbian, gay, bisexual and transgender community." 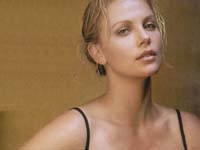 Last year, Theron told TV's "Extra" that she and her partner, Stuart Townsend, would not wed until gay and lesbian couples attained the legal right to marry. "I feel so fortunate that I am in a relationship with a wonderful man," Theron said Saturday night. "I find it incredibly unfair that because of our sexual preference, we have the rights that we have, and that, because of someone else's sexual preference, they don't have those same rights.” she said according to FOXNEWS.COM

"This is very surreal for me because two years ago, I stood right here and won my Oscar for Monster," Theron told the audience at the Kodak Theatre as she accepted GLAAD's highest honor, the Vanguard Award.

Teri Hatcher presented the award for outstanding film in limited release to Transamerica, although the movie's star (and Hatcher's Wisteria Lane neighbor) Felicity Huffman was not able to attend the ceremony.

Melissa Etheridge was presented the Stephen F. Kolzak Award, named after a Los Angeles casting director and given to an openly lesbian, gay, bisexual or transgender media professional who has made a significant difference in promoting equal rights.

The GLAAD Media Awards are held in four separate ceremonies, in Los Angeles, New York, Miami and San Francisco. The New York ceremony was held on March 27 and honoured comedian Sandra Bernhard, among others. The ceremony will be held in Miami on May 25 and San Francisco on June 10, gaynz.com reports.

Charlize Theron was born in Benoni, South Africa, on August 7, 1975. Her father Charles worked on the family's road construction business, which mother Gerda took over after Charles' death in 1991. Charlize experienced tragedy early on in her life, when her mother shot her father in self-defense, after he threatened to kill her and Charlize in a drunken state.

Since the farm they lived on had no means of entertainment (no television or movies), Charlize used her passion for dancing (specifically ballet) and her imagination to stay entertained when not caring for the farm animals. After dancing in Johannesburg, she began modeling in Milan, Italy, by the time she was 16.

But modeling was not fulfilling enough for Charlize, who wanted to return to heroriginal passion -- dance -- after only a year as a model. While modeling gave her the opportunity to travel, she decided to stay in New York after a modeling shoot in order to study ballet at the Joffrey Ballet School in the Big Apple.

Unfortunately, Theron suffered a knee injury that ended her ballet career. Jobless and broke, Charlize headed for the West Coast with her mother's support. In 1994, her luck changed when she made a scene at a Los Angeles bank after a teller refused to cash her check and a talent scout noticed her.

John Crosby encouraged Charlize to try her hand at acting. It didn't take much convincing, since she was currently unemployed. With no money to pay for a coach to perfect her English accent, Charlize set out to lose her South African accent (her mother tongue is Afrikaans) by singing along to popular music and watching American television shows.

Fortunately for her career Charlize was not cast as the lead stripper in the disastrous movie Showgirls. But Charlize finally landed her first "real" role, as Helga Svelgen in 1996's 2 Days in The Valley. She also appeared in 1996's That Thing You Do!, directed by Tom Hanks, and still voices her appreciation to Hanks for giving her that break. Theron then appeared in 1997's Trial and Error, co-starring Michael Richards, and had a supporting role in The Devil's Advocate, starring Keanu Reeves and Al Pacino.

After a role in Woody Allen's Celebrity as a supermodel, the long-legged beauty starred in the Disney film, Mighty Joe Young (both in 1998). 1999 was a big year for Charlize, with a string of heftier roles; she co-starred with Johnny Depp in The Astronaut's Wife and had a supporting role in the Academy Award-winning film, The Cider House Rules She even made time to pose for Playboy's May 1999 issue.

In 2001, Theron reunited with Keanu Reeves for the schmaltzy Sweet November (she apparently turned down the lead female role in Pearl Harbor for the role), and had a small part as a madam in 15 Minutes. After a role in Woody Allen's The Curse of the Jade Scorpion (2001) and the thriller Trapped (2002), Charlize showed off her driving skills in the summer 2003 hit, The Italian Job, with Mark Wahlberg and Edward Norton.

In 2004, Charlize can add Head in the Clouds (co-starring Penelope Cruz) and the HBO movie The Life and Death of Peter Sellers to her resume. She will also star as the title role in Aeon Flux and in Class Action, both set for release in 2005.

On the romantic front, Charlize Theron was dating Stephan Jenkins, lead singer of Third Eye Blind, from 1998 to 2001. While the band's song "Blinded (When I See You)" seemed to have been written with Charlize in mind, it's clear that she has moved on: she is currently dating Irish actor Stuart Townsend.