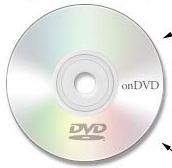 According to the Japanese newspaper Yomiuri, world giants Sony and Toshiba failed to reach an agreement on DVD format that will be used in the next-generation DVD products. This means that by the end of this year there will be two new formats on the market that will divide entertainment and multimedia industry almost in half.

Production group with Sony and Matsushita Denki (Panasonic's trademark) at the top developed new DVD format that is called Blu-Ray as it uses blue-violet laser. Technology allows recording up to 50GB. However, the disc is very expensive and can be easily scratched, although TDK specialists more or less managed to get rid of the latter disadvantage. The HD-DVD of Toshiba and NEC proves more durable. At the same time it can hold only about 15GB, although specialists at Toshiba claim that it is much cheaper than Blu-Ray. Another advantage of this technology is that it uses red laser, the one that records and reads information on today's DVD. As a result the technology of the introduction into mass production will be much cheaper. There is a blind alley: technologies are incompatible. However, both company groups spent hundreds of million dollars on research and are not going to give up.

The question is rather serious as DVD market is esteemed at billions of dollars and touches upon the interests of a large number of computer and playstation manufacturers and especially film studios. Cinema and multimedia is divided. Yomiuri reports that Sony is going to transfer the smash-hits of Walt Disney, 20 Century Fox to the new discs while Toshiba is doing the same with Warner Bros., Universal Pictures and Paramount Pictures. All in all much depends on Hollywood's decision. At the moment the dream factory is divided as well. Besides, Sony and Panasonic have already started supplying Japan with new Sony Playstation 3 with Blu-Ray technology that will be on sale next spring. Dell and Hewlett Packard took the side of Blu-Ray. HP even declared that it is going to supply its PCs with Blu-Ray drives by the end of the year. Meantime Toshiba will start selling its new DVD drive in the nearest future.

One can say that consumers must decide for themselves. However, they will have to pay up to be up on the latest multimedia trends. The thing is that it is not a common case when everything can be solved rapidly by ruining one of the technologies. Production groups have great financial possibilities and can fight for a long time, especially if we take into account that one of the technologies will become the basis for the new ones to come. Old DVD technology will be outdated soon. That is why admirers of films, music, video and computer games will have to buy both drives as there is no possibility of creating some kind of hybrid. Besides, negotiations of both production groups prove that they are going to fight rather than ease consumer's life.