Spaceships of the future to take humans to Mars in 2.5 hours

Humans can build spaceships capable of reaching the Moon within minutes; a flight to Mars will take 2.5 hours, and a flight to Alpha Centauri, which is scores of light years away from Earth, will take a mere 80 days. 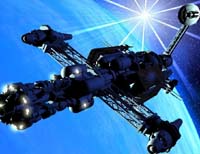 Spaceships of the future to take humans to Mars in 2.5 hours

Incredible journeys can be a reality, say two German Doctors of Physics who put forth an audacious theory. Walter Dresher from the University of Innsbruck joined forces with Joachim Hoiser, a leading scientist with the German company HPCC-Space Gmbh.

“The German physicists build their work on a theory formulated by the German scientist Burkhard Heim. The theory was put together in the 1950s,” says Vadim Pimenov, deputy director of the Institute of Theoretical and Applied Physics under the Russian Academy of Sciences, professor at the Lomonosov Moscow State University. “Heim, a brilliant physicist and philosopher, was the first scientist who began thinking over the principles of space flights using a “hyper-engine.”

The concept seems improbable at first sight. In actuality, it is a byproduct of the efforts aiming to combine the quantum mechanics and the general theory of relativity – two theories that so far have successfully foiled all the attempts to make them “friendly,” mostly due to differences in the interpretation of space and time. Heim made use of the Einstein concept regarding gravitation as a manifestation of distortions in the “fabric” of space and time. However, he suggested that all kinds of fundamental interaction be considered a manifestation of the complete set of spatial dimensions.

Heim introduced two additional dimensions since the existing ones were not enough for proving his theory. The physicist reportedly proved that gravitation and electromagnetism could combine in his 6-D space. He also maintained that a gravitational force could turn into an electromagnetic one, and vice versa, under certain conditions. It is still unclear whether Heim succeeded in combining the quantum mechanics and the general theory of relativity. For reasons unknown, the scientist refused to made public all details of his theory until he carried out a “decisive” experiment. The experiment did not materialize either due to technical reasons or a lack of funds.

Dresher’s colleague Joachim Hoizer, along with a U.S. scientist John Kelvin and a Russian academician Nikolai Kozyrev supported the theory. According to them, a fast-spinning circle combined with a ring-shaped magnet in a strong magnetic field can “push” a space ship to other dimensions where different values of the natural constants, including the speed of light, may exist. The machine will be capable of creating anti-gravitation by moving a spaceship in regular space. “We’re not trying to challenge the existing laws of physics, we are expanding our views on them,” said Kelvin.

“Academic scholars would have reacted quite skeptically to such argumentation had it taken place a few years ago,” says Prof. Pimenov. “Nowadays the situation has changed. The American Institute of Aeronautics and Astronautics recently published a list of last year’s award winners for the best theoretical works in aerospace research.

“The instructions for a space drive based on the Heim quantum theory” by Hoiser and Dresher was awarded in the category “The Future Flight.”

According to New Scientist, the work is a collection of speculations on the possibility of making a material object pass into the so-called parallel space (or “other universes) and return.

The dreams of a time machine are beginning to take shape in America . The so-called Z-machine is being built by the American National Laboratory Sandia. The machine is one of the world’s most powerful “impulse” sources of a magnetic field and the most powerful generator of roentgen rays. Similar experiments are being conducted in Moscow , by the Institute of Theoretical and Applied Physics under the Russian Academy of Sciences.