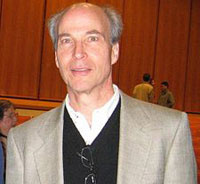 "That is a true honor for Russia. We are glad that a world-famous scientist and a recognized authority has accepted the proposal of the Russian party", - Surkov told RIA Novosti.

The plans on establishing an ultra-modern scientific and technical complex for the new technologies development and commercialization were announced by RF President Dmitriy Medvedev in February. It became known in March that the center will be built in Skolkovo.

Head of Renova Group of Companies Victor Vekselberg became the project coordinator, while academician Jores Alferov was appointed Co-chairman of the Scientific and Technical Council on the Russian part.

Kornberg won the Nobel Prize in chemistry for the research of the mechanism of the cells’ ability to copy genetic information.

"Kornberg’s research is on the border of chemistry, genetics and biology, and Alferov’s proposal to invite Kornberg to the project is quite logical, so long as the biomedical technologies development is one of the directions of the Russian economics improvement determined by the Russian president", - First Deputy Head of the President’s Administration underlined.

In his opinion, Kornberg’s participation in the project is the first important step to involve the outstanding foreign scientists in the project.

Surkov informed that the first meeting of the Scientific and Technical Council, which task is the expertise and determination of the basic activities of Skolkovo Innovational Center, is going to be held in autumn. The composition of the Council is going to be defined by Alferov, Kornberg and Vekselberg.

"Skolkovo is an open project with a clearly defined mission: it is the creation of an innovative environment and, simultaneously, the use of an utterly flexible strategy that will be defined not by officials but by outstanding scientists, engineers and businessmen involved in the project. I believe that Mr.Kronberg’s opinion will significantly define the strategic line of the project development", - Surkov said.

Roger David Kronberg was born in 1947 in the USA. His father, Arthur Kronberg, is also a Nobel prizewinner and a recognized authority in the field of enzymes biochemistry; he won an award in physiology and medicine in 1959. The 12-year-old Roger was present at his father’s awarding ceremony in Stockholm.

Kornberg is member of the US National Academy of Sciences and American Academy of Arts and Sciences. In 1997, Kornberg won a Harvey Award.