Another round of multilateral and bilateral talks on Russia's entry into WTO finished last week in Geneva. Once again such issues as customs administration, technical 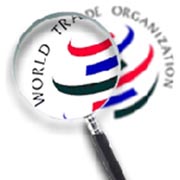 barriers in trade, veterinary and phytosanitary measures and agriculture were discussed. In other words, Russia was demanded to make concessions in terms of regulating these issues. The main opponents were the US, Australia and Argentine. However, the results actually were quite modest: only the protocol with Argentine was signed.

In fact, December WTO Ministerial Conference in Hong Kong, where Russia hoped to be admitted to the organization, is not a long way away. Optimism held out in the Russian government until the very last moment. “Given the positive attitude of our partners, the USA in the first place, we will be able to solve this problem by 2006,” Russia's Deputy Prime Minister Alexander Zhukov said at the World Economic Forum held recently in Moscow. However, there came a flop. The head of the Russian delegation, the head of the Department of Trade Negotiations of the Russian Ministry of Economic Development and Trade, Maksim Medvedkov commented on the results of the round: “We hope to finish the talks over Russia's entry into the World Trade Organization by the end of the spring. One of our goals was to try to do this by the time of the Hong Kong Conference. We do not exclude a possibility of moving forward by December. However, officially and technically, we will not be able to finish the procedures by this time, of course.” Although Russia has finished talks with 50 countries, including the European Union, there are still eight persisting ones left: the USA, Canada, Australia, Switzerland, Columbia, Malaysia, Philippines and Uruguay. According to Medvedkov, talks with these countries can be also finished by the end of this year, but not in time for the Hong Kong.

Actually, 2006 was called a more realistic time for finishing the talks long time ago. Right before the last round of the talks Maksim Medvedkov himself said that the multilateral talks were more likely to be finished by the summer of 2006. There was even a suggestion to transfer issues left inside WTO, i.e. to admit Russia and then to go on with the talks. Perhaps, WTO has not had such a practice before.
At the moment Russia might face new problems. Right at the final lap the rivalry between Russia and Ukraine became escalated. The question is who will be the first. The other day WTO Director-General Pascal Lamy publicly expressed his doubts concerning the possibility of Russia and Ukraine to finish all the talks in time for the ministerial meeting in Hong Kong. “There is a long queue of countries aiming at joining WTO. Russia and Ukraine are among them,” Lamy said. “It seems to me that Russia and Ukraine won't be able to finish talks on joining WTO by the end of this year. They will have to wait a little bit more”. According to Lamy Saudi Arabia will be the only one to join WTO at the December Conference. Looks like it succeeded in explaining the slow-witted opponents the role of the zakah in taxation system of the country. However, the demand of regulating domestic and export prices on energy carriers remains.

In fact, there is nothing terrible inRussian and Ukraine waiting a little bit more. If only Ukraine would not become the first. If this happens as the Ministry of Economic Development and Trade fears, Ukraine will put forward its own demands at once, as a member of WTO. These demands may concern trading pipes or sugar or lard or whatever…Participants of the talks seem to be self-confident: if Russia becomes the first it will put obstacles in the way of Ukraine and will settle old scores in trade (which exist, of course).

Meantime, both countries are trying to convince each other that they will be synchronizing all the processes until the very moment of joining WTO in order to do it on the same day. However, when speaking to the third persons, Kiev representatives now and then express the desire to outdo Russia. Viktor Yushchenko, for instance, is absolutely sure that Ukraine will enter WTO by the end of this year. He has every reason to say so. Although the country is completely unprepared to join WTO from the technical point of view (consider tariff negotiations and the legislation), it can be given a little push at a high political level. The US assures Ukraine of its support: prominent senators and even George W. Bush stressed several times that joining WTO is the question almost solved.

However, even such a great support of the west does not guarantee a prompt entry to Ukraine. The obstacles can be of different kind. One of the examples is the Supreme Rada refusing to pass the legislative package that is necessary for joining WTO. Besides, the doubts concerning the pro-Western “orange” authorities rise again. Deputy-head of the Centre for Research in Corporate Relations, Rostislav Ivchenko believes that the entry into WTO is not the main problem of Ukraine at the moment. He gives the examples of Georgia, Moldavia and Kirghizia that joined WTO long time ago but it did not make their living standards any better. They joined the organization so quickly and easily because they practically did not have national industry and were eager to comply with any conditions, as Ivchenko points out. At the same time both Ukraine and Russia have something to protect. Ivchenko thinks that the country must preserve certain protectionist measures in industry as well as in agriculture, where some 12 million people are involved. Otherwise, after Ukraine joins WTO these people will be practically ruined and out in the street. “Thus, it doesn't really matter if we will not join WTO in 2005”, the expert said. Besides, he thinks that it is worth synchronizing the processes of joining WTO of both Russia and Ukraine. According to Ivchenko, that will make them more politically influential and will provide them with the free hand at the talks and thus will help them in achieving more concessions from the opponents. However, seems like both Russia and Ukraine solve the “to join or not to join question” at the political level. Thus, the opponents in their turn solve the “to admit or not to admit” question at the same level.