Demising US dollar gives way to euro cash in Russia

The dollar's behavior against the ruble makes a lot of Russian people turn to the euro. The Central Bank has recently published the statistics of last-year currency operations. As one can see from the information, authorized banks sold the euro cash in the sum of $1 billion 105.54 million to Russian natural persons in December of 2004. It became the all-time high record of euro sales since the introduction of the euro cash in 2002. On the one hand, December is a month that precedes the long period of New Year holidays. 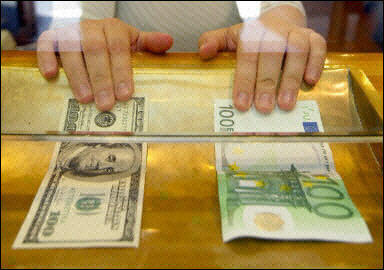 Wealthy Russians prefer to spend them somewhere in Europe having quite an amount of the euro cash in their pockets. On the other hand, there are not many such people in Russia, who can afford spending their holidays abroad. They could not spend such a huge amount of money on holiday tours. For the time being it is not clear if the increased demand on euros was only a seasonal factor, or one could already view it as a change of Russian people's traditional fondness to the US dollar.

An analyst of Gazprombank, Sergei Suverov, believes that Russians are disappointed in the declining dynamics of the dollar. “Everybody is used to the idea that the US dollar is a good way to avoid inflation. Now the American currency has lost its function – the dollar does not save people's savings anymore. The dollar rate has been sliding against the ruble. Furthermore, people look at the politics of the government and the Central Bank, which decided to place a part of its gold and forex reserves in both dollars and euros. To crown it all, Russian people travel to Europe much more often than they do to the USA. One may also recollect analytical forecasts, in which it was supposed that the dollar would continue its demise on account of the deficit of the US balance of payment and budget. To crown it all, Asian banks can also sell dollars and buy euros to diversify their reserves,” the specialist said.

Sergei Suverov does not think that the ongoing demise of the dollar will eventually lead to any extremities. “The American economy is still very strong, technological and efficient. I am talking about corporate data here, not the macroeconomic indexes of the USA. The corporate America is still an example for Europe to follow from the point of view of its effective and technological capacity. It would be naive to say that the dollar will vanish from the international arena. Furthermore, the situation in Europe is far from being perfect. Europe is not the most dynamic region of the world as far as its economic structure is concerned. The European Union is facing three problems at the moment: unemployment, the ageing of the population and the ageing of productive capacities. Asia is the most dynamic market in the world today. A lot of European enterprises do not meet competition with cheap Asian goods, especially when it comes to mass consumption goods. Therefore, the current correlation of the two major currencies has been most likely caused with the decline of the dollar, which in its turn appeared because of financial problems in the USA. As far as the ruble is concerned, the Russian currency depends on oil prices most. The current situation testifies to the high level of oil prices and the favorable development of the macroeconomic situation in Russia. The ruble has not obtained a long-term stability yet – the diversification of the Russian economy is just getting started,” Sergei Suverov said.

Russian people will probably favor their national currency in two or three years. The default of 1998 still has a big impression on the majority of Russians. A lot of them realize that it is oil, which makes for the strength of the ruble. The popularity of ruble tools, ruble bank deposits, first and foremost, will definitely be growing. The dollar and euro rate will most likely be stabilized, because Europe is not interested in the expensive euro: it decreases the competitive ability of the European economy. Russia will probably become a three-currency space (dollar, euro and ruble), and people will be psychologically oriented at the strongest one of them.