The World Trade Organization is ready to welcome even a country with unstable state structure and destroyed economy. This could be an interpretation of the WTO's decision to commence negotiations regarding Iraq and Afghanistan's membership in the organization. 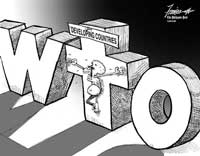 Foreign experts say that it was the USA that lobbied the issue of Iraq and Afghanistan's membership in the WTO. The US administration needs to show the victory of democracy on the occupied territories to the world as soon as possible.

In the meantime, the WTO administration rejected Iran's application to join the organization for the third time. The reason has remained the same: the USA still accuses Iran of developing nuclear weapons and supporting the international terrorism.

The approval to join the WTO is just a first step on the long way to the membership status - it may take a lot of years before a country becomes a member. It is obvious, however, that Iraq and Afghanistan's incorporation in the WTO is a politically motivated decision. One shall presume that the question will be settled within a rather short period of time.

IMF experts stated that the WTO is gradually losing its erstwhile power and status of an elite trade club. The WTO is becoming a declarative organization, a report from the International Monetary Fund runs.

The report particularly says that the WTO membership does not bring any economic dividend to its members. Numerous benefits, which WTO members obtain for their own market protection, nullify the idea of the free trade agreement. Furthermore, a lot of countries, the USA first and foremost, feel free to break the organization's agreements.

In addition, foreign specialists notice that WTO's decisions are becoming more political and symbolic. To crown it all, if unstable countries join the WTO, it might complicate the organization's decision-making process in the future.

New members like Iraq and Afghanistan will only intensify the economic inequality between WTO members. The dominating position of the USA and its allies, however, will be improving. As a result, the organization might turn into another tool of the United States to show pressure against the rest of the world.

Russia needs to think twice about its membership in the WTO, taking into consideration the sacrifices that it has already made to obtain everyone's agreement. Russia signed the Kyoto Protocol with a hope that the European Union would approve its membership in the WTO. Moreover, the Russian administration handed over several islands to China with a view to obtain the agreement of the latter. It is obvious already that Russia's certain industrial branches will find themselves in an extremely difficult situation, if Russia finally becomes a WTO member. The damage will be caused to the car industry, the aviation industry, insurance and many other economic branches. Russia will be evaluating its losses, while the WTO will be turning into a public thoroughfare.