Russian arms to flow to Iraq

Russia lifts the embargo to deliver arms to Iraq. President Putin signed the adequate decree in connection with the resolution of the UN Security Council about the establishment of security forces in Iraq, particularly the Iraqi armed forces. 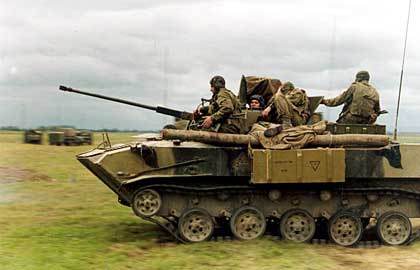 The Iraqi army, police and special services have not received import arms for 15 years, when the embargo was imposed. The Russian market of weapons will deal with a very wide opportunity, even if the new Iraqi military system will not have its erstwhile power of Hussein's regime. Until 1990, Iraq was considered the major client to buy Russian arms. Moscow earned $30.5 billion on its contracts with Baghdad from 1958 till 1990. Iraq paid $22.4 billion of the sum prior to the incursion in Kuwait. In addition, Iraq transferred $950 million for training specialists, technical repairs and other assistance. About $900 million were wired for the construction of military objects and enterprises. The current debt makes up $7.8 billion.

The decision to lift the embargo also gives an opportunity to claim the above-mentioned debt. “The withdrawal of sanctions gives a green light for all kinds of international transactions with Iraq, including arms deliveries, if they do not contradict to the objectives formulated in the UN Security Council resolution 1546 dated June 8, 2004,” Alexander Shumilin, director of the center to analyze Mideast conflicts said.

Four thousand six hundred and thirty tanks, including 1,038 up-to-date T-72 tanks, 2,810 armored vehicles, 2,714 armored troop carriers, 3,279 artillery systems, 725 antitank rocket complexes have been exported to Iraq during the military cooperation with the country. Air defense troops have been outfitted with anti-aircraft complexes. About 1,500 battle and transport planes have been sold to Iraq, as well as 348 helicopters and 41 battleships.

Soviet and Yugoslavian specialists built a howitzer plant in the town of Yusufia and a Kalashnikov machinegun factory. The Hattin factory was built in the town of Iskanderia – the plant manufactures ammunition for field, anti-aircraft and tank artillery. Another factory, Alkakaa, was built in Iskanderia to make gunpowder and hard rocket fuel, and also a factory for the production of aviation ammunition. Moscow granted over 60 licenses to Iraq during the military cooperation for the production of arms and military hardware. Production was launched on 30 of them, the T-72M1 tank assembly was launched in the town of Taji, for instance.

The infrastructure of the Iraqi army is totally compatible with Soviet and Russian arms. The new Iraqi government has already evinced interest in the import of Russian arms. Iraqi Defense Minister Hazem Shaalan said during his Moscow visit in the spring of the current year that Iraq would continue buying the Russian military hardware and equipment.

The US administration supported the withdrawal of the UN embargo. In addition, it did not demand the Iraqi security forces should start using the military technologies of NATO standards.

The number of Iraqi military men will make up 35 thousand people, including 1.4 thousand officers. Artillery and armored troops are scheduled to be created in the near future. Five patrol boats and a marine regiment will be included in the Iraqi coast guard. The country will also have the river patrol unit. Two S-130 Hercules planes and six UH-1 choppers of the American production will make the national air force.

Russian exporters on the market have rather strong competitors. Ukraine backs up its export claims with its participation in coalition forces. Furthermore, Poland still possesses a large reserve of Soviet arms. Polish and Ukrainian firms have announced their willingness to take part in the tender to deliver tanks and armored vehicles to Iraq. The deal is estimated at $800 million. Experts believe Russia will not gain the monopoly on the market.

The Russian government has not released any statement yet to comment on the actions to be taken for the retrieval of Russia's role on the Iraqi market of arms. Both the Federal service for military and technical cooperation and Rosoboronexport (the arms export monopoly) refused to comment on the president's order.