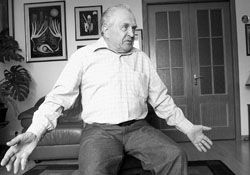 Everything has been calculated in today's modern world. It isn’t difficult to picture our country as a firm. Who's going to calculate our country's damages today? This will be the topic of our discussion with Doctor of Philosophy Alexander Zinoviev who is also an expert of the West.

-Alexander Alexandrovich, neither one of modern dictionaries has such term as “Russophobia”. Does it mean that the subject does not exist?

-The subject does exist, and it is quite important these days. It’s got deep historic roots. But I am a sociologist; I have always been interested in purely sociological aspects. I became interested in the subject after my visit to the West I 1978. There, I could spot such phenomenon practically everywhere. Russophobia was everywhere: in mass media, in scientific circles, on a day-to-day basis. I posed myself a reasonable question: Why is this happening?

-And now I am aware of the answer. It's all in the fight, the fight that’s been going on for the entire XX century. Western world was fighting against Communism. Historically it so happened that Russians became very much connected with communist ideas and their practices. Western world in turn, views all Russians as hereditary communists. They even began to falsify our past, especially Soviet reality. The way it was interpreted was pathetic. I used to write a lot about it. Interestingly, but even after the collapse of the soviet empire, those falsifications of historic data of Russian peoples, of Russian character did not cease to exist.

The West treated me as though I was a anti-Communist and an anti-Soviet (even though I regarded myself as neither one). That is why I had access to everything that was done in sovietological centers and secret services there. It was then that I discovered that the governing western elite (both political and ideological) had developed a long-term program, which included the collapse of the soviet socialist regime and liquidation of communism in the first place. That wasn’t all however. One of their major tasks was also aimed at bringing Russia down so that the country will never be able to recover fully and rise to its initial position of the great superpower.

-I see… But what exactly do you mean by “Program”? Perhaps, you presume that everything has already been predestined for us?

-As far as the program is concerned, even if we were to treat my statements about this program as merely hypothetical, there exist facts to support it. In fact, you can see them everywhere. Another program-maximum entails complete liquidation of the Russian peoples from world history.

-What makes you so surprised? After all, it has been revealed that some plans entailed reduction of the Russian population to 50 millions. And M. Thatcher, by the way, used to note that even 15 million people will be enough to develop Russia for the sake of the West.

Today, based on contemporary social laws, a country needs to have a minimum of 300 million residents in order to maintain its sovereignty. Why do you think Europeans suddenly began to unite? It is important to consider the following circumstance. The West facilitates politics of genocide in regards to Russians. Unfortunately, many of our fellow countrymen are on their side.

Western world has already developed strategic plans to establish its domination, to westernize the whole world. Obviously, we remain enemies for the western world today because Russians differ significantly from Westerners in terms of their characters and their historical fate. Western way of life will never be fully adopted in Russia. In the West, they not only have bad attitude towards our “hereditary inclination” towards communism, but towards the Russian-factor as is/ what does it mean? Thing is, Russians are extremely gifted people in a variety of subjects. In just 70 years, we were able to contribute so much to the world’s culture that no other nation ever did. And in such difficult times! During my stay in the West, I noticed that the country was fearful of the fact that the Soviet Union will continue to develop and strengthen.

Russians are very talented people, let me repeat myself. However, one of their major disadvantages is that they cannot use the fruits of their creativity. As a result, their “fruits” are being purposely stolen from them. Not long before my return back home from America, I had a meeting with an old friend of mine, an American who was a specialist of Russian culture. We had a long conversation. Among other things he mentioned that America does not have a need to study sciences. He said they could easily use Russian knowledge, which they can easily acquire for little or no money.

As a sociologist, I immediately determined that if we were to isolate the US completely and stop the brain drain there, the consequences will be catastrophic. The US will be unable to cope with intellectual deficit.

-Perhaps, we should listen to those who critique us? Maybe we should really take a closer look at the following accusations: that Russian mafia flooded the West, Russians who throw their money around are really annoying and so on. Actually, personal culture of some Russians doesn’t appear sympathetic…

-I personally noticed that Western media was overflowing with reports regarding Russian mafia. One day, I got really tired of hearing the same stuff over and over again. So I decided to write them a letter asking them to provide some names of those members of the Russian mafia. In the end, it turned out that neither one of the persons who had been accused in mafia connections had Russian last names.

Russophobia today is a fascinating phenomenon from the sphere of ideology and politics, or rather political strategy. In XX century Russians encroached upon world's leadership. Our nation has opened a new line of evolution. One can say: we have existed 70 years in a communist country. At the same time, the issue can be approached from a different perspective. It can be said that despite major advantage of the West and all the hardships that we had to endure, we have been able to hold on for whole 70 years! That is why they do not like us and are still fearful of us over there.