The growth of the GDP of the Russian Federation will reach the level of 4-4.5 percent in 2010 and may further increase to 6 percent. Putin said in December of 2009 that the nation’s GDP would grow by approximately three percent in 2010. The bailout measures taken by the Russian government produced a positive effect, the prime minister added. 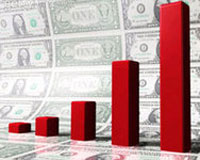 Putin also said four months ago that Russia’s foreign trade, gold and currency reserves were growing too. The latter amounted to $450 billion.

Mr. Klepach, deputy minister for economic development, told Interfax this week that Putin was conservative in his estimation of the GDP growth.

“According to official forecast, the growth of the GDP in 2010 will make up 3-3.5 percent, but it’s a conservative estimation. If the growth continues, we can achieve the level of 6 percent. The most real forecast for the GDP growth is 4-4.5 percent,” the official said.

The Central Bank of Russia is also optimistic about its prognosis for the future rise of the Russian economy. Aleksey Ulukaev, deputy chairman of the Central Bank, believes that the growth of the Russian GDP would be 3.1 percent higher than the government predicted and would reach 4 or 5 percent.

Last year, Russia’s GDP had a 7.9-percent reduction instead of the predicted 8.5 percent. The drop mostly occurred because of the sliding oil prices. Oil sales bring 25 percent of income to the nation’s GDP.

In January of 2010, Russia’s Gross Domestic Product increased by 5.2 percent in comparison with the same period of 2009.

The future development of the Russian economy will depend on global economic cycles. Analysts predict another wave of the economic crisis in 2018. The Russian ruble will most likely be strengthening against other currencies if the Central Bank continues its current activities on the financial market.