The world's media is poised on the possible confrontations between the remaining settlers in the Gaza Strip and the Israeli armed forces, perhaps also waiting for a strike by Hamas or another extremist group as the last Jews leave this occupied territory, the first such pullout of land occupied illegally in 1967. 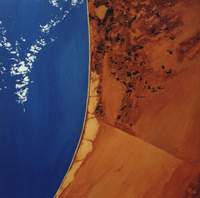 The story is, the world rejoices at Israel's change of heart as the hardliners fight to stay on. However, this slant is flawed with two mistruths. The first is that this approach ignores the fact that the vast majority of Israeli citizens, if not the Jewish community worldwide, hail Ariel Sharon's decision to pull out of Gaza, a territory which never legally belonged to the State of Israel as defined by the UNO. Needless to say, the State of Israel provides for the settlers forced to leave the territory, with handsome compensation and relocation packages of up to 400,000 USD.

The second is that there is no reason to rejoice because the Gaza pullout is only the first stage of what must be a wider policy to leave the lands illegally occupied, for want of deriding the United Nations as useless. All those who clamoured for Saddam Hussein to abide by UN resolutions must now do the same with Israel.

Why should Arabs have to abide by this organism and Jews be left free to do what they want, when they want? Is it because Jews are superior to Arabs? Or is it because the Jewish lobby is so powerful, since it serves as a Kingmaker even in republics?

Ariel Sharon's plans are well known, and have been since he designed his own road map of the Middle East thirty years ago. However, his road map is radically different from that defended by the Group of Four, namely the UNO, EU, USA and the Russian Federation. Ariel Sharon's road map always included a pullout from Gaza, but included also a reinforcement of the illegal occupation of the West Bank, where a band of settlements was to be built and maintained to the east of Palestinian positions, creating a Palestinian island in their own territory surrounded by illegal Jewish settlers.

Nobody these days in the international community defends the destruction or disappearance of Israel, which has as fundamental a right to existence as has the Palestinian State, just as the citizens of both parties have the right to a life, like everyone else, in peace and security, building a future for their children.

However if the rule of law is to exist and if states are to be taken seriously, then there must be one law for all, imposed by the lawmakers and not parts of the law accepted piecemeal by those who think they have the right to pick and choose.

Israel does not have the right to pick and choose because Israel is not above the law. If Israel occupies the West Bank illegally, then Israel must leave. Sooner or later, in peace or by the rule of the bullet, in goodwill and friendship or in sullen defeat, because the writing is on the wall. Gaza is an important first step, supported by the majority of Israel's citizens. The West Bank must follow. It is a question of when and how many innocent people get hurt until Israel obeys international law like the rest of the international community.