Iraq: In need of legitimacy 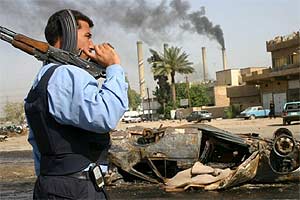 Are these terrorist attacks against the legitimate government of Iraq or are these the actions of freedom fighters against what they perceive as a government placed by pro-western Shiite and Kurdish groups, waiting in the wings to get revenge for years of Sunni-led dominance under Saddam Hussein?

Probably, neither. Given that the majority of the Iraqi people want to get on with their lives, finding a job to put food on the table and create a brighter tomorrow for their children, the political element is relevant only for those actively involved in the fighting. However, to talk of a legitimate and legitimised government is to ignore the fact that in general terms, the Sunni population did not back the new government. How legitimate is a government elected by two sides of a triangle?

The way out of the impasse

The American-led security forces are learning the hard way that the squeaky-clean Iraq package presented by Messrs Bush, Cheney and Rumsfeld, that there would be a quick war with low casualties and the Iraqi people would rise up with open arms, welcoming the troops who could then go home as heroes, has unfortunately and predictably not happened. One has only to read this column six months before the attack was launched to see how predictable the outcome was.

A small part of the population in percentage terms but large enough to cause serious security problems, backed by a large number of foreign mercenaries, has decided to make a stand against the USA and its allies in Iraq, because it was in Iraq that Washington took one step too far. Iraq is George Bush’s point of incompetence, under Peter’s principle (which states that a man will rise until he reaches the point of his downfall or stagnation).

The campaign was poorly planned, fraught with arrogance and under-estimation, abominably carried out in military and humanitarian terms and to cap it all, ended in cases of torture and disrespect for human life, while the Geneva Convention was broken on several occasions. Hardly a feather in the cap for George Bush.

As in all situations in which the loss of human life heavily outweighs any acceptable equations in terms of pay-backs, there has to be a way forward. Reinstating Saddam Hussein as President is no longer a possibility, because the equilibrium which held him in power has been destroyed.

Now the situation is as chaotic as it was when violence saw Saddam Hussein sweep to power, to be backed by Washington as the stabilising force in the region. American military presence is only going to fan the flames of hatred and since the US troops and the security forces they back are so evidently incapable of maintaining law and order (500 deaths in a few days is totally unacceptable by any standards), the sensible thing would be to leave as soon as possible, saving the lives of the US troops who found themselves in the nightmare of politically instigated battles and saving the lives of the peaceful and innocent Iraqi citizens going about their business.

The question is, how to continue to support the Iraqi security forces and government, the members of which become targets for assassination the moment they take office? A process of open dialogue with the UNO and with the Arab League might be a start, finding a way to persuade those who are backing the Resistance to lay down their weapons, now that the Americans have gone.

Any other solution would appear, at this moment at least, doomed to failure.

It is a fitting epitaph for George Bush’s foreign policy that he came to Iraq on the crest of a wave of lies about Baghdad supporting international terrorism and promptly created the contitions for a sea of terrorists to pour in over the borders.

George Bush put international terrorism on the map of Iraq. By attacking the country illegally (and he knew this, because if the second resolution was not necessary in the UNSC, why did Washington try so hard to get it?), George Bush gives every terrorist everywhere in the world the perfect escuse for violence: what is the difference, after all, between an American citizen being murdered by an Arab flying a civilian aircraft into a building and an Arab civilian being murdered by an American pilot who decided to blast his residential area with cluster bombs?