Bush: Arrogance instead of diplomacy before summit

Bush insinuates that Russia is not democratic

Enough. If George W. Bush is arrogant enough to speak about Russia's supposed lack of democratic processes on the eve of his summit with President Vladimir Putin in Bratislava, then let us treat this insult with the answer it deserves. 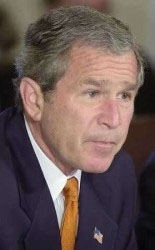 "I also believe that Russia's future lies within the family of Europe and the transatlantic community", said George W. Bush in his address at the Concert Noble, Belgium, today.

For the information of this President, who parachutes into Europe once every two years because he dare not step off an aircraft in most countries outside his own, Russia has always been part of Europe, while the USA has not. Therefore what authority does this citizen of the USA have in speaking about European affairs?

"Russia, to make progress as a European nation must renew a commitment to democracy and the rule of law".

Democracy? President Putin was elected by a democratic process, was he not? Rule of law? Did the Russian Federation break every rule in the book by breaching the Geneva Convention and UN Charter, launching an illegal war, based on barefaced lies, slaughtering tens of thousands of innocent people in a sovereign nation? No.

Therefore what authority does George Bush have to speak about the rule of law and a commitment to democracy?

"Our alliance stands for a free press", says Bush.

What is George W. Bush trying to do? Humiliate Russia? Expect Vladimir Putin to kiss his feet?

The rule of law depends on the respect for the legal mechanisms constituted by the collective will of the international community. The rule of law is neither about dropping cluster bombs on civilians nor about sending record numbers of people to their deaths, like a Nazi concentration camp. The rule of law is not about torturing prisoners at Abu Ghraib or Guantanamo or Baghram.

Russia respects the rule of law by insisting on following the UN Charter in all cases. Does the USA?

No? Then George W. Bush had better shut up and watch what he says. Who the hell does he think he is, anyway? He was elected by a percentage of his people to govern his country. Nobody asked for his opinion elsewhere and nobody accepts his authority outside the USA. He was not elected by Russians, after all.