George "I am not sorry" Bush 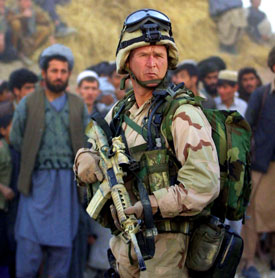 Aides have to apologize for Bush

The speech of George W. Bush on Al Arabiya TV yesterday was a horrendously snide, manipulative, sinister and downright dishonest piece of political maneuvering, one more befitting an evil seventeen-year-old who has put his hamster in the microwave and then lies to try to get himself off the hook.

As more and more pictures of systemic and systematic torture by US military personnel on Iraqi civilians pour into the news agencies, demonstrating a complete breakdown of control and command within the armed forces of which George W. Bush is the Commander-in-Chief, the President of the United States of America has the audacity to try to justify the shocking acts of cruelty perpetrated by his forces by comparing them to what happened in the Iraq of Saddam Hussein, with the weak addendum that in this case, the guilty will be punished.

Who handed out billionaire contracts to his cronies, such as Richard "Dick" Cheney, without even opening a tender? Do these actions follow democratic principles? Is this George W. Bush's "freedom and democracy", does he hope to win people's "hearts and minds" by torturing them, by sodomising them, by placing ladies' panties over their faces?

Are these the deeds of a good Christian? If George W. Bush did not perpetrate these acts of evil himself, as a good Christian he should have at least the fibre and the decency to say sorry. But he didn't. He cannot bring himself to do it. Why not?

Because he is a moral coward, a blatant failure in everything he has done, he is totally incompetent for the job he is in and he is a disgrace to his party, his nation and to the international community.

The final straw is that he gets his aides to say sorry for him.