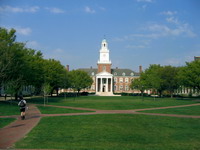 Mencken, a reporter and columnist for The (Baltimore) Sun, was a prominent literary and social critic in the first half of the 20th century. He was known for his coverage of the famous Scopes "monkey" trial that debated the issue of evolution, and for his disdain for the comfortable middle class, which he called the "Boobus Americanus" and the "booboisie."

The collection includes magazines containing Mencken's articles, letters written by Mencken, photographs and books that reprinted Mencken works, mentioned Mencken or were inspired by him, said Cynthia Requardt, the William Kurrelmeyer Curator of Special Collections at the Sheridan Libraries.

The acquisition will more than double the university's Mencken collection.