Tori Spelling is available for weddings. 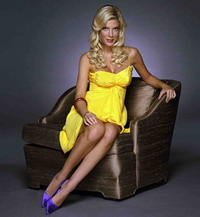 "Yep, that's right. ... Reverend Tori Spelling! I did it last week online and my official certificate is in the mail. I'm so proud," the 34-year-old actress said in a posting Monday on the MySpace.com site she shares with her husband, Dean McDermott.

"I was so honored when the couple asked me to officiate. We did it on the front steps of the Chateau as 40 of their friends looked on seated in a loungelike atmosphere," Spelling wrote.

Spelling and McDermott, who were married in May 2006, will reprise their innkeeper duties for the show's second season, which premieres Aug. 14.

"It was so beautiful as I united Tony and Dex as life partners in love. They wrote their own beautiful vows and there was so much love surrounding them that there wasn't a dry eye in the driveway!" wrote Spelling, adding that she was "beyond nervous."

"I've done live theater and presented at the Emmys and this by far was my scariest moment simply because they had bestowed such an honor upon me and I didn't want to let them down."

Spelling and McDermott took their 4-month-old son, Liam, out for a spin on the dance floor at the wedding reception. "The three of us swayed and smiled to Madonna," she said. "It was a magical evening of pure love."

Spelling starred on the long-running '90s TV series "Beverly Hills, 90210," produced by her father, Aaron Spelling, who died in June 2006.