Hundreds of people, most with white canes, marched from a downtown Atlanta hotel to a city park more than half a mile away Tuesday in support of: Blind people can do what other people do. 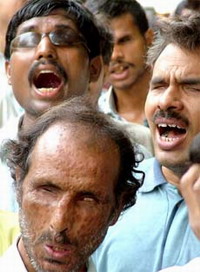 The event organized by the National Federation of the Blind was called a civil rights march.

Two of the main goals: access to jobs and education.

"The blind have a 70 percent unemployment rate, and we have a 10 percent rate of being taught to read and write braille in our schools in this country," said federation president Marc Maurer.

For Al Elia, 33, a computer consultant from Boston, the most important issue to him is access to study materials for advanced degrees.

"I can tell you from trying to get study materials to go to law school, it's something that needs to happen," Elia said.