Detainees routinely tortured in northern Iraq's Kurdistan according to report 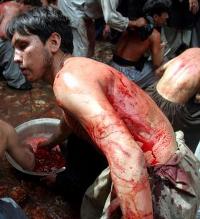 Detainees routinely tortured in northern Iraq's Kurdistan according to report

The Human Rights Watch report based on interviews conducted from April to October 2006 with more than 150 detainees demanded a comprehensive overhaul of detention practices in the Kurdish region and urged an independent body to investigate torture claims.

"We are surprised that the Kurds are practicing such violations after they were victims of torture during the Saddam era," Sarah Leah Whitson, Middle East director for Human Rights Watch, said, referring to the ousted Iraqi leader's oppression of the Kurds.

"We appreciate the efforts by Kurdistan government to combat terrorism and secure Kurdistan, but we see that such violations against prisoners are not a good thing," she told a press conference in the northern city of Irbil.

The Kurds, close allies of the United States, run an autonomous zone in northern Iraq, which under Iraq's post-Saddam constitution has its own security forces and administration. The region has run its own affairs since breaking with Saddam's regime after the 1991 Gulf War, surviving with the protection of U.S. warplanes until Saddam's fall.

Mohammed Faraj, a lawmaker who heads the human rights committee in the Kurdistan region's parliament, said a parliament commission visited Kurdish prisons in April and found that "indeed there were violation."

"The Kurdistan government has a real and strong intention to work hard to solve this issue," he said, adding that the government released some 400 detainees held in security forces' prisons in June and that more were expected to be freed.

Kurdistan has largely been spared the violence that has ravaged the rest of Iraq  though Sunni insurgents have carried out several deadly attacks in the region, including a suicide truck bomb attack on a Kurdish political party in May that killed more than 50 people and was blamed on al-Qaida.

Kurdish security forces also operate in areas with large Kurdish populations outside the autonomous zone, such as the cities of Mosul and Kirkuk, which have seen frequent Arab-Kurdish violence as the two communities vie for power. Kurds want to incorporate oil-rich Kirkuk into their self-governing region, a step strongly opposed by Arabs.

The New York-based Human Rights Watch report said abuses have been committed against suspects detained by Kurdish security personnel and others taken in U.S.-Iraq raids, including suspected insurgents. The report listed Kurdish violations of both international human rights law and Iraqi codes.

Most of the hundreds of prisoners are Kurds, "detained for terrorist, political or religious extremism causes," Jassir Abdul-Razaq, an official in Human Rights Watch's Mideast department, said. Several Islamic militant insurgent groups that have carried out attacks, including Ansar al-Islam, have a large number of Kurdish members.

In interviews the New York-based group conducted at detention facilities described as "severely overcrowded and unhygienic" detainees said they were beaten with metal rods and cables and subjected to electric shocks. Some detainees were kept blindfolded and handcuffed for several days at a time, the report said.

The report said the "vast majority" of the hundreds of detainees held by Kurdish security forces have not been charged with a crime, allowed access to a lawyer or provided with a means of appeal. It mentions several cases where defendants remained in detention after being acquitted or serving their terms.

Whitson said the Human Rights Watch team visited 10 prisons run by Kurdish security forces in the cities of Sulaimaniyah, Irbil and Dahuk, but "there are hidden prisons that we could not visit and prisoners whom we were not able to see."

Kurdish officials denied torture was taking place when Human Rights Watch presented them its findings, but they promised to form an independent investigative committee to review the allegations, Whitson said. "We hope that the Kurdish officials will live up to their promises," she said.

"Although Kurdish authorities have taken serious steps to improve conditions at detention facilities, they must do more to end the practice of torture," Whitson said. "The government must punish prison officials and interrogators found responsible for abuse."