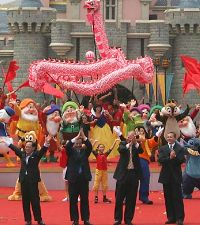 Disney has decided that Mickey, Minnie and Goofy can't conquer the coveted Chinese market alone, and that a little local magic should do the trick.

The Walt Disney Co. will premiere the Chinese-language movie "The Secret of the Magic Gourd" in Beijing on Friday - one of a number of projects aimed at carving itself a strong position in China.

The film, made in Hong Kong, is based on a popular Chinese story about a boy who discovers an enchanted gourd - a squash-like vegetable - that grants him wishes.

The movie, made by Hong Kong's Centro Digital Pictures, is the first-ever Disney-branded movie made outside Hollywood. Disney's famed animators were not involved.

It's a significant venture into local-flavored programming for a company that has until now counted on Mickey and friends to help win fans around the world. Disney's first park on Chinese soil, Hong Kong Disneyland, is a near-replica of the original Disney theme park in California.

"We are not fixed on the idea that we have to lift stuff from the U.S. and drop it into China and if that doesn't work, we don't have business. I think that would be a narrow way of doing business," Cheung said.

"Magic Gourd," which will be promoted with story book and merchandise tie-ins, is only the beginning of Disney's localization in China, with plans to assemble a group of Chinese Disney characters alongside the more traditional ones, he says.

Cheung said the story of "The Magic Gourd" fits with Disney's traditional values. The movie's main character is troubled by his magical vegetable which steals from others to please him.

"It's about a kid growing up understanding himself, family, positive values," Cheung said.

"It's directly from Bob and our global leaders," Cheung said.

"They look at China as very, very important to The Walt Disney Co., especially in the longer term ... (in) 10, 15 years," he said, but declined to say if Disney's China operations are profitable.

"The company, especially Bob and the board, are looking at how we can grow, how we can ensure long-term growth of this company," he said.

Disney already has a significant presence in China.

Chinese audiences have seen "Toy Story," "Finding Nemo" and a stage production of "The Lion King," and they can buy Mickey Mouse Magazine and Pooh Magazine. They also have access to Mickey dolls at any of the more than 4,200 Disney outlets in China.

The Chinese government keeps tight watch over media content. It limits the number of foreign movie imports to about 20 a year and has banned foreign cartoons from prime-time television.

Cheung's appointment as Disney's top China executive also appears to be part of the company's strategy to boost its local business. The company has expanded its China staff from about 70 to nearly 400 in the past 2-1/2 years.