A woman died after confrontation with police outside an Oklahoma City homeless shelter - the latest example of someone who died after being shocked with a Taser, an electric stun gun designed to help officers subdue violent suspects without nightsticks or guns. 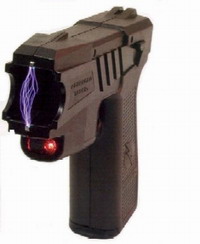 But in Milisha Thompson's case, she was already on the ground and in handcuffs. Her death has raised questions about whether police are abusing the stun guns by using them as a convenient labor-saving device to control uncooperative people.

"It's a legitimate law-enforcement tool," said Florida State University criminology professor George Kirkham, a former police officer. "But it's supposed to be used as a defensive weapon. The problem we're seeing around the country is it's being used abusively."

Amnesty International USA, which has done a study on Taser use, has counted 250 cases in which people died after being stunned with a Taser. The human rights organization cannot say whether the shock from a Taser actually caused those deaths. But some experts contend the weapon can be deadly, particularly when used on suspects who use drugs or suffer from heart problems.

A blurry surveillance video shows Thompson running near the homeless shelter, seemingly agitated. The picture is poor, so exactly what happens next is unclear, but at some point she struggles with officers and is shocked.

Thompson, 35, soon stopped breathing. The cause of her May 19 death has not been determined, pending results of toxicology tests.

Police Chief Bill Citty insisted officers acted appropriately because the 6-foot (1.83-meter), 260-pound (118-kilogram) Thompson was kicking and posed a danger, even though her hands were shackled.

Kirkham said only in rare circumstances would it be appropriate to use a Taser on a handcuffed person. If officers have problems with a handcuffed suspect, a better approach would be to bind the suspect's legs, he said.

Tasers have been officially listed as a contributing factor in about 12 deaths across the United States, said Steve Tuttle, a spokesman for Scottsdale, Ariz.-based Taser International Inc., which makes the weapon. He said 11,000 U.S. law enforcement agencies use Tasers.

The company has prevailed in all 45 wrongful-death or injury cases in which it has been a defendant, Tuttle said.

Taser International and police say that no weapon is risk-free and that Tasers actually save lives by helping officers avoid more dangerous weapons.

Over the past two years, Tasers have been used on people in handcuffs in Colonial Beach, Virginia; Austin, Texas; Pensacola, Florida; and Lorain, Ohio, though none of those cases involved deaths.

In the Virginia case, federal civil-rights charges were filed against the two officers involved, but a judge exonerated both. In Pensacola, a fired sheriff's deputy was cleared of wrongdoing last month but was not given his job back. In Ohio, the officer involved was reinstated. In Austin, two officers were acquitted of official oppression.

In response to such complaints, some police departments have prohibited the use of Tasers on handcuffed suspects.

In Oklahoma City, the police chief said, two officers were investigating a report of drug activity near the homeless shelter when they encountered Thompson. She ran up to the officers twice and was being disruptive, so police put her in handcuffs, Citty said.

Citty said Thompson continued to be combative, so officers used the Taser. She was on the ground when an officer tried five times to shock her, stunning her twice in the neck, Citty said.

Her husband, Marvell Thompson, disputes the police report and contends his wife was shocked 20 times. "They did use excessive force on my wife," he said.

Mike Gassaway, an attorney for Thompson's estate, said Thompson and her husband worked at the shelter, called the City Rescue Mission.

He said she ran toward officers because she had found a crack pipe and wanted to give it to them. Gassaway said they overreacted and used the Taser after having trouble getting Thompson in the patrol car.

"There were a substantial amount of people there, and we surmise the police wanted to give them a show of force," Gassaway said. "So they simply used Mrs. Thompson as their example of what would happen to other people."

"The Taser should not be used at all, especially on women," Marvell Thompson said. "There are other ways to control people."