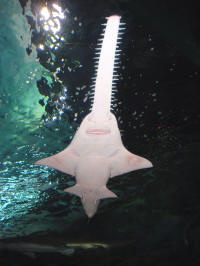 All trade in sawfish – a large shark-like rays whose long snouts bristling with teeth are in high demand among collectors – was banned at an international conference on endangered species.

All seven species of sawfish are listed as critically endangered by the World Conservation Union due mainly to overfishing.

They are highly valued for their fins, meat and snouts known as rostra which can measure up to 2 meters (6.5 feet). They also are caught and traded as live animals for aquaria and parts of their bodies are used in traditional Asian medicines.

Local Kenyan fishermen "could retire after catching one sawfish due to the high value of sawfish fins - US$443 (EUR332) per kilo (2.2 pounds) for export - and rostra up to US$1450 (EUR1,086)," Dorothy Nyingi of Kenya told the triennial meeting of the Convention on International Trade in Endangered Species, or CITES.

Delegates at a committee meeting in The Hague supported a proposal to ban all commercial trade in six of the species and to allow sales of one sawfish species found in Australian waters. The decision is expected to be formally accepted by the full conference before it ends Friday.

Compounding the problem of hunting and trade, sawfish are slow to mature and produce few young. They also often are caught in nets intended for other fish, conservationists say.

"We are relieved that international trade pressure will be lifted for these critically endangered species," said Steven Broad, director of TRAFFIC, a group monitoring the trade in wildlife. "Trade, along with fishing pressure, was pushing them towards extinction."

CITES lists more than 7,000 animals and 32,000 plants whose trade is regulated, including about 800 highly threatened species that are banned from commercial trade without special licenses.

Later Monday, delegates were expected to vote on proposals to protect the European eel - a popular food throughout Europe which is suffering from overfishing, destruction of its habitat and pollution.

European Union fisheries ministers meeting in Luxembourg Monday agreed to a recovery plan for the eels aimed at ensuring 40 percent of adult eels caught by fishermen are released. Member states agreed to draw up specific plans by the end of 2008.

The CITES conference also was to consider regulating trade in red coral, a slow-growing deep-sea coral that is prized for use in jewelry and in Brazilian populations of spiny lobsters.