Experts predict 2007 to be hurricane season in U.S.

American hurricane experts expect 2007 to be an especially active season, producing up to 17 tropical storms and hurricanes and a "well above average" possibility of at least one striking the United States. 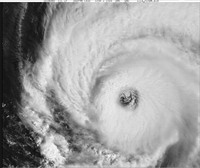 Experts predict 2007 to be hurricane season in U.S.

Philip Klotzbach, a research associate at Colorado State University, and Joe Bastardi, the chief hurricane forecaster for AccuWeather Inc., acknowledged that similar predictions for the 2006 season were wrong but cited a more active storm cycle this year.

Klotzbach and Bastardi were addressing the Second Annual AccuWeather Hurricane Summit, a gathering of more than 100 weather experts and academics to discuss the coming season with members of the energy industry, whose business can be severely affected by storms.

"We didn't predict very well last year," Klotzbach said, noting that 2006 turned out to be an average year with 10 tropical storms and five hurricanes. None made landfall, he said, the first time since 2001 that has happened.

Klotzbach said there is a 74 percent chance of a major hurricane striking the United States, with a 49 percent chance it will hit along the Gulf Coast between the Florida Panhandle and Brownsville. Storms reaching Category 3 or greater on the hurricane scale are considered major, with winds up to 130 mph.

Gray and Klotzbach revise their forecast periodically as the nation moves further into the summer hurricane season. The next update is scheduled May 31.

Although Bastardi predicts fewer storms than his counterparts, he agreed 2007 would be more active than usual. Bastardi, who said the nation is in "a very, very volatile" weather period, said he expects 13 or 14 named storms, six or seven of which will strike the U.S. coast. Bastardi said the Texas Gulf coast is twice as likely to be hit as in an average year and Florida appears four times as likely.

"We are living in a time of climatic hardship," Bastardi said. "We're in a cycle where weather extremes are more the norm and not the exception."

Klotzbach acknowledged forecasts made earlier in the hurricane season, such as those in June or July, are less reliable than those in August or later, when the more serious storm season begins.

Bastardi, who forecasts for the world's largest private weather service, said he fears climatic conditions could lead to storms that intensify relatively late in their life when they are closer to landfall.

Gray, a professor of atmospheric science and the nation's best-known hurricane forecaster, focused on what he called the "grossly exaggerated" claims that increased carbon dioxide emissions were leading to global warming and indirectly to more hurricane activity.

"Yes, we've had some global warming, but it's mostly natural," Gray said. "This is not a crisis for us. Even if it was, there's nothing we could do about it."

Gray said a pervasive influence of political correctness had led many weather experts to refrain from criticizing the science of global warming and noted that many experts in the mid-1970s believed the planet was cooling.

He predicted that the "30-year global warming trend" would end in the next five to 10 years and that global mean temperatures in 20 years will be lower than today.

"Hurricanes are not significantly impacted by carbon dioxide increases or by global surface temperature rises," he said.