An Episcopal priest in Massachusetts was ordained as the first married priest in the Los Angeles Roman Catholic Archdiocese. 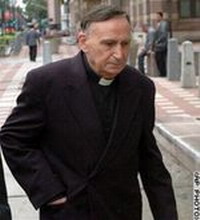 The Rev. Bill Lowe was ordained Sunday by Cardinal Roger Mahony by way of a little-known pastoral provision allowing married clergy who have left the Episcopal Church to enter Catholic priesthood. The celibacy requirement is waived.

More than 70 men have used the 27-year-old provision to become Catholic priests in the United States.

Church officials said Lowe was the first member of the Los Angeles Catholic Archdiocese to be so ordained, and Mahony said the action should be viewed as an exception, not an indication the church is looking to bring in more married priests.

Lowe, 68, has been married 44 years to his wife, Linda. The couple, who have lived in Camarillo for four years, have three adult children and five grandchildren.

More than 700 people were on hand to witness Lowe become a father at Padre Serra Parish in Camarillo.

"We don't know what God has in store for us, but we're up for the adventure," Lowe said of his calling to the priesthood.