Huge 75-storeyed towers to be built in Vietnamese capital 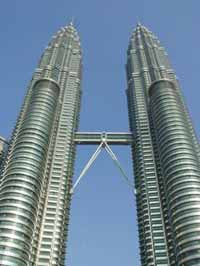 Huge 75-storeyed towers to be built in Vietnamese capital

The towers would be by far the largest buildings in Vietnam, where the tallest structure is currently a 34-story apartment building in Hanoi.

The new project, to be completed in 2013, is a joint venture between South Korea's Posco Engineering and Construction Co. Ltd. and its Vietnamese partner, Vinaconex. It is envisioned as a virtual city within the city, with 1.6 million square meters of office, retail and apartment space spread across 270 hectares (670 acres).

The land is located in Ha Tay province, just west of the capital, but Hanoi officials plan to incorporate it into the city limits.

Vietnam's economy has been growing at over 8 percent a year, and new buildings are quickly rising across Hanoi and Ho Chi Minh City, the nation's southern business hub.

Construction is expected to begin soon on a 60-story office tower in Ho Chi Minh City, formerly known as Saigon, where the tallest building is now 33 stories.

"We have seen a rapidly rising demand for apartments, offices and hotels in Hanoi," said Choe Oonho, a Posco spokesman. "With the economy booming, Hanoi officials plans to enlarge the city, and our complex will be a residential hub."

Posco is also planning to build a US$1-billion steel plant in southern Vietnam.