More than 500,000 people have commented on a proposal to list polar bears as "threatened" under the U.S. Endangered Species Act. 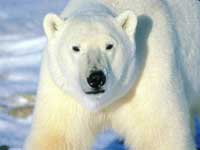 Monday was the deadline for the public to weigh in on whether America's polar bears, found exclusively in Alaska, merit additional protection due to global warming.

Bruce Woods, spokesman for the U.S. Fish and Wildlife Service in Alaska, said Monday that e-mail comments alone topped the half-million mark. He said it could be several days before the agency has a tally on the number of comments but that the agency also received enough surface mail and petitions to fill multiple boxes.

Woods could not say with certainty whether any other species has brought in as much public comment.

"To my knowledge, none ever has," he said.

Conservation groups claimed Monday that their side alone provided half a million comments.

"The sense of urgency about the fate of the polar bears is like nothing we've ever seen in an endangered species listing," said Andrew Wetzler of the Natural Resources Defense Council. "The plight of these animals is critical, and so is the sense that the changes affecting them are eventually going to affect us. That's why there is such tremendous public support for getting this listing done."

The comments collected by the U.S. Fish and Wildlife Service, however, were not an opinion poll.

Woods said the agency sought public comment regarding the science behind the December decision, plus additional information on polar bear denning, sea ice change and potential threats to the animals.

In the next eight months, he said, the agency will review the collected comments and consider new studies that could help decision-makers.

"We'll continue to work with GS (U.S. Geological Survey) and our international partners to continue to gather the best available data," Woods said.

Interior Secretary Dirk Kempthorne in December proposed listing polar bears as threatened, defined in law as likely to become endangered in the foreseeable future. The more drastic listing under the law is "endangered" - in danger of extinction throughout all or a significant portion of its range.

Kempthorne's decision was forced by a petition filed by the Center for Biological Diversity of Joshua Tree, California, which said polar bears could become extinct by the end of the century because their sea ice habitat is melting away due to global warming.

Polar bears are considered marine mammals because they spend most of their lives on sea ice. They use it as a platform to hunt their main prey, ringed seals, plus other ice seals. In Alaska, females use sea ice to den or to reach denning areas on land.

The Fish and Wildlife Service is required by law to render its listing decision by next January.

Conservationists hope - and Alaska business interests fear - that designating polar bears as threatened due to global warming will carry a huge economic cost, forcing federal agencies around the country to consider the affect on polar bears before granting permits that would increase greenhouse gas emissions.

"The listing likely will force anyone in America whose business requires the emission of greenhouse gases to go through an additional layer of consultation with the Fish and Wildlife Service, creating delays and expenses," said Marilyn Crockett, deputy director of the Alaska Oil and Gas Association, in testimony last month.

If polar bears are listed, agency officials will form a team to formulate a recovery plan.

"If we were going to go forward and propose critical habitat, economic impact would be part of that formula," Woods said.

Sea ice off the coast of Alaska and elsewhere in the Arctic last winter continued its downward trend. The University of Colorado's National Snow and Ice Data Center reported last week that Arctic sea ice this winter just missed setting the record for fewest square miles (kilometers) covered since monitoring by satellite began in 1979. In recent years, winter sea ice has fallen by at least 600,000 square miles (1,554,000 square kilometers), double the size of Texas.

Critics of additional protections for polar bears say a listing would be the first for a species that is healthy in numbers and distribution.

Obtaining an accurate count of polar bears has been a challenge due to the harsh conditions and remoteness of their habitat. A U.S. Geological Survey report released in November indicated that the Beaufort Sea polar bear population has experienced a significant drop in cub survival. The study also determined that adult males weighed less and had smaller skulls than those captured and measured two decades ago.