Cardinal Francis George was released from the hospital after he fractured his hip falling at a Chicago church. 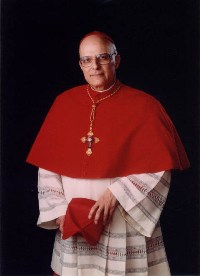 George will recover at home and plans to maintain his regular work schedule, although he will postpone all public appearances for the next few days, including Sunday's traditional Easter Mass at Holy Name Cathedral, according to a statement from the archdiocese.

George, 70, was hospitalized at Loyola University Medical Center in Maywood on Saturday afternoon after the mishap at Saint Ferdinand's Parish. George slipped on the church's marble floor while blessing Easter baskets.

Because he suffered from polio as a child, George wears a brace on his right leg that causes him to fall occasionally, archdiocese spokeswoman Colleen Dolan said.

George received applause after being helped back to the altar. He continued the service before being taken to the hospital by an aide when he had trouble walking.

"This is not an unusual occurrence for me to fall," George said during the Mass. "I fall many times in the course of a year."

The injury will require physical therapy and George will use a walker for about a week so he doesn't put pressure on the hip while it heals, said archdiocese spokeswoman Colleen Dolan.

The Roman Catholic archbishop, one of the most prominent U.S. cardinals and the spiritual leader of more than 2.3 million Catholics in the Chicago area, underwent surgery July 27 to have his cancerous bladder removed.