Tony Blair:"I'm glad that our 15 service personnel have been released " 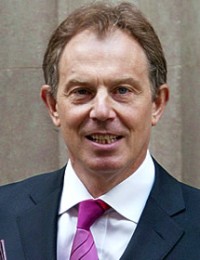 Tony Blair:"I'm glad that our 15 service personnel have been released "

During a brief statement outside his Downing Street office, Blair thanked British allies in Europe, the U.N. Security Council and the Middle East for their help in securing freedom for the Royal Navy personnel.

"Throughout we have taken a measured approach, firm but calm, not negotiating but not confronting either," Blair said. "I'm glad that our 15 service personnel have been released and I know their release will come as a relief not just to them but to their families that have endured such stress and anxiety."

"The disagreements we have with your government we wish to resolve peacefully through dialogue," Blair said.

Foreign Secretary Margaret Beckett, whose department has been locked in discussions with Iranian authorities since the sailors and marines were seized March 23, stood alongside Blair but did not speak.

In a written statement, Defense Secretary Des Browne said the personnel had acted with dignity during their captivity.

"It is vital that we get them back home quickly and safely so they can be reunited with their families and loved ones _ that is our priority now," he said.

During a news conference Wednesday in Tehran, President Mahmoud Ahmadinejad announced the crew would be freed, and state television showed some of the sailors and marines _ including Leading Seaman Faye Turney, the only woman among the 15 _ speaking to the Iranian leader.

An Iranian diplomat, who spoke on condition of anonymity because of the sensitive nature of the case, said the sailors would be handed over to British diplomats in Iran and that it would then be up to the Foreign Office to decide how they would return home.

"They will go through some brief formalities and then they will go to the embassy," the diplomat said. "They can go on a British Airways flight to Heathrow, they can go through the UAE, it is up to the British Embassy in Tehran in coordination with the Foreign Office here."

He said the Foreign Office or British Embassy would have to make the travel arrangements for the seized sailors. In London, a Foreign Office spokesman said those plans had not yet been made, and that officials wanted to "make sure we've actually got them in hand, and that they're safe and well."

The sailors will leave Tehran early Thursday and arrive at London's Heathrow airport around 1200 GMT, said Robin Air, father of Royal Marine Capt. Chris Air. Families will be reunited with the crew later Thursday at a military base, he said.

A group of British soldiers who were seized by Iran in 2004 were sent back to the British sector of southern Iraq aboard an Iranian commercial flight, after stops in Kuwait and the United Arab Emirates.

The British personnel were captured by Iranian forces in the Persian Gulf while patrolling for smugglers near the mouth of the Shatt al-Arab, a waterway that has long been a disputed dividing line between Iraq and Iran.

Tehran says the crew was in Iranian waters. Britain insists its troops were in Iraqi waters working under a U.N. mandate.