Not quite, but it was an important start. Multiparty elections have granted citizens their voices in many countries, including South Africa, Ethiopia, Nigeria, Liberia, Sierra Leone and, on Sunday, war-ruined Congo. 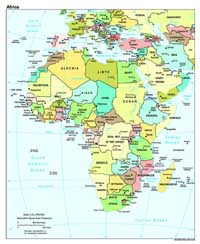 Voting can provide ways to make and implement decisions that affects large numbers of people, but "what's more important in unleashing democracy and development is to create structures, mindsets and practices that involve the people," says Pottie, who focuses on democracy projects.

Luc Mofemba, one of millions of Congolese who voted Sunday to select a democratic administration to replace a postwar, transitional government, said Congo had a host of economic and social problems to combat.

Congo, a massive country of 58 million people at the center of Africa, is in many ways a symbol of the continent's postcolonial struggle, and its hopes that legitimate governments will at last act on their peoples' behalf.

Ruled by tiny Belgium for 75 years, the country was little prepared to govern itself, with only 15 university graduates here at independence in 1960. Chaos set in quickly.

As with many colonial overseers, the Belgians elevated some ethnic groups over others, setting the stage for future conflict, according to the AP.

U.S.-backed dictator Mobutu Sese Seko took over in 1965 and brought some semblance of outward stability to the country he renamed Zaire, a reliable bulwark against communism for the West.

But the masses seethed as Mobutu, with his wooden scepter and leopard-skin pillbox hat, and his cabal stashed billions of dollars in overseas accounts and ruled by fiat from palaces with gilded bathroom fixtures.

Many African leaders cynically used communism to prize cash from either the West or the Soviet Union. As the Cold War ended, so did their overseas support - and the money they used to keep control.