Aircraft dropped water and retardant on the blaze, while bulldozers and hand crews dug lines to stop the flame. 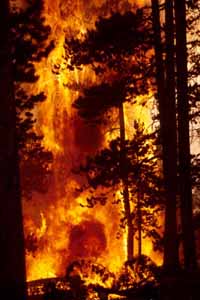 Fire crews plan to use infrared mapping Sunday evening to get a better estimate on the fire's acreage.

In southern New Mexico, a fire burning in the Gila National Forest was held back as thunderstorms brought rain and cooler temperatures to the area. The blaze has charred 47,196 acres (18,878 hectares) of dense stands of ponderosa pine and spruce fir, the AP reports.

The fire, detected June 19, destroyed one cabin and forced evacuations from the area, although authorities have not said how many people were evacuated.