His abduction came days after he photographed shrapnel from a Hellfire missile, allegedly fired by an unmanned American warplane that killed a wanted Egyptian al-Qaida figure, Hamza Rabia, in Mir Ali. 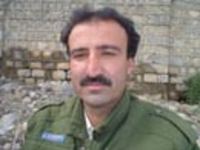 No one has claimed responsibility for abducting Khan, but his relatives blame Pakistan's top spy agency. The government denies that the Inter-Services Intelligence, or ISI, played a role, and authorities have blamed Islamic militants.

Information Minister Mohammed Ali Durrani told the journalists that a High Court judge will lead a probe into Khan's abduction and killing, the AP reports.

Similar protests were being held across Pakistan to condemn Khan's killing, Usmani said.