The document was issued by the Pontifical Council for the Family, whose head, Cardinal Alfonso Lopez Trujillo, is a strong opponent of the use of condoms. 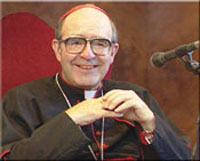 However, the document did not mention an ongoing debate within the Vatican on whether the Roman Catholic Church could permit condoms to battle AIDS in a particular circumstance, when one partner in a marriage has the virus, the AP reports.

It reaffirmed the famous 1968 encyclical "Humanae Vitae" that stated the Vatican's opposition to contraception. Since then, it said, couples "have been limiting themselves to one, or maximum two children."

It also condemned in-vitro fertilization, artificial insemination and the use of embryos, the AP reports.

The document did not break any new ground but summarized traditional Vatican positions.

Lopez Trujillo sparked controversy three years ago when he said condoms don't prevent AIDS and may help spread it because they create a false sense of security. The Vatican insists sexual abstinence is the only sure way to fight AIDS.

Several other cardinals have argued that the use of a condom within a marriage would be the lesser of two evils if it prevents passing on HIV infection to the partner.