Japan will send about 50 troops to quake-hit Indonesia to assist in quake relief efforts, a news report said Monday. An advance team of Japan's Self-Defense Force is already in Yogyakarta to conduct surveys on the extent of damage and assess needs in the province. 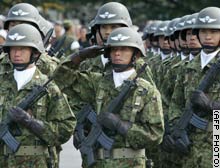 Defense Agency chief Fukushiro Nukaga is expected to issue a dispatch order for 50 more troops, including medical personnel, later Wednesday, Kyodo News agency reported. The team will depart for Indonesia on Thursday, Kyodo said. An agency spokesman who spoke on condition of anonymity, citing protocol, said an order was expected soon but couldn't confirm details of the dispatch.

Tokyo sent about 900 troops to Indonesia to assist in relief efforts the country's largest-ever overseas relief effort after the 2004 tsunami, which killed 230,000 people across Asia. Japan also sent about 260 troops to Pakistan in October 2005 after an earthquake there, reports the AP.