Georgia criticized the arrival of 500 new Russian peacekeepers in South Ossetia on Wednesday, saying the rotation of troops was illegitimate because they arrived in the breakaway region without visas. A day earlier, Russian and Georgian officials both warned of a serious rise in tensions in South Ossetia following an armed standoff between Georgian soldiers and Russian peacekeepers. 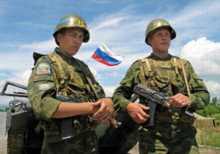 A 1,500-strong peacekeeping force comprising Russians, Georgian and Ossetian troops has patrolled South Ossetia since it broke away from the central government in the 1990s. But Georgia, which is trying to reassert its authority, complains that Russian forces side with the separatists. Minister for Conflict Resolution Georgy Khaindrava demanded that the peacekeepers, who arrived in the region Tuesday via the Russian-controlled Roksky Tunnel, must obtain visas. The Defense Ministry called the rotation a criminal act.

Russian officials maintain the issue should be discussed by the commission overseeing the peacekeepers. Russian Defense Minister Sergei Ivanov, speaking in the Azerbaijani capital of Baku, said the rotations would continue on schedule. "The rotation of Russian peacekeepers takes place once every six months, and we have no plans to cancel such rotations," Ivanov was quoted as saying by the Interfax news agency.

On Saturday, a Georgian Interior Ministry special unit confronted Russian peacekeepers, with both sides drawing weapons before the Georgian troops withdrew, Russian and Georgian officials said. Khaindrava had blamed Russian troops for sparking the standoff by not allowing a Georgian police patrol to enter the village of Kurta.

Russia's Foreign Ministry called the incident a "provocation aimed at destabilizing the situation in the conflict zone." Russian Maj. Gen. Marat Kulakhmetov, commander of the peacekeeping forces, said violence was averted only because of Russian peacekeepers' restraint. Georgia's parliament earlier this year unanimously called for Russian peacekeepers to withdraw from South Ossetia, where they have been stationed since 1992, and be replaced by international forces.

Ties between Moscow and Tbilisi have cooled markedly since President Mikhail Saakashvili swept to power more than two years ago during Rose Revolution. Saakashvili has courted the United States and other Western nations, seeking membership in the European Union and NATO, reports the AP.