Egypt's Interior Minister: Sinai attacks are linked to those of 2004, 2005

This week's bombings in Sinai are linked to the terror attacks in the peninsula's resorts of Sharm el-Sheik last year and Taba in 2004, Egyptian Interior Minister Habib el-Adly said Wednesday. 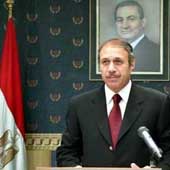 Egypt's Interior Minister: Sinai attacks are linked to those of 2004, 2005

"The information we have indicates that (the perpetrators) are Sinai Bedouin, and the latest operations are linked to the previous attacks," el-Adly told state television, referring to the terror attacks in the Sinai resorts of Sharm el-Sheik last July and Taba in October 2004.

El-Adly said he believed Wednesday's attack, in which only the suicide bombers were hurt, was carried by the same group responsible for the Dahab bombings on Monday, and that they both strikes were linked to those of 2005 and 2004, reports AP.