European Commission President Jose Manuel Barroso arrived Friday in Japan , where he is expected to discuss global issues including climate change and peace in the Middle East with Japanese leaders, officials said. Barroso made a courtesy call on Prime Minister Junichiro Koizumi upon his arrival and was scheduled to give a speech at the Japan Institute for Social and Economic Affairs later in the day, the Foreign Ministry said. 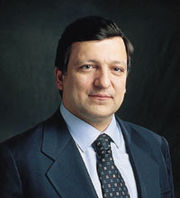 Barosso and other EU officials are expected to meet with Koizumi and other senior officials on Monday to discuss wide-ranging issues including the influence of Russia and China , world trade, global warming, Iran , Iraq and the Middle East .

Before leaving Brussels , Barosso told reporters he hoped his visit would strengthen the "strategic partnership" between the Europe and Japan . Economic ties between the two have improved considerably in recent years. Japan's exports to the EU have risen from 50.1 billion in the mid-1990s to 73.7 billion in 2004, while EU exports to Japan rose from 28.8 billion to 43.2 billion, according to the EU.

European investments remain less than 1 percent of Japan 's gross domestic product compared to 12 percent in the United States . The EU delegation also includes Wolfgang Schuessel, the Austrian chancellor whose country holds the EU's rotating presidency. He is to arrive in Japan on Sunday. EU security affairs chief Javier Solana and Benita-Ferrero-Waldner, the EU external relations commissioner, are to join the delegation Monday, reports the AP.