The German government on Wednesday condemned as "brutal and inhuman" an attack that left a man with life-threatening injuries and stirred fresh concern about neo-Nazi violence. 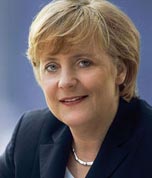 Chancellor Angela Merkel was "shocked" by the attack Sunday on the Ethiopian-born German, her spokesman Thomas Steg said. "It is a loathsome, brutal and inhuman act."

The 37-year-old man, an engineer who has lived in Germany since his teens, was in an artificially induced coma after suffering brain and skull injuries in a beating at a tram stop in Potsdam, just outside Berlin.

Authorities suspect racism. Voices shouting "Nigger!" and other insults were heard on a call the man was making to his wife that was recorded in her voicemail.

Police put part of the recording on the Internet in hopes that someone might recognize the voices and help identify the attackers. Authorities and a private foundation offered rewards totaling Ђ10,000 (US$12,200) for information.

Investigators said Wednesday they were following up several leads, but gave no details.

The attack has revived concern about violent far-right groups in the run-up to this summer's soccer World Cup, when hundreds of thousands of foreign fans are expected to visit Germany.

Federal prosecutors said Tuesday they were taking over the case because of the suspected involvement of "right-wing extremists" who pose a potential threat to Germany's internal security, reports AP.