Overcoming its concern for privacy, Germany has set the stage for a decision in mid-May on opening Nazi records on 17 million Jews and slave laborers killed before and during World War II in a relentless pursuit of racial superiority. Eleven nations that oversee the 30 million to 50 million documents housed in the German town Bad Arolsen will vote on whether to amend a 1955 treaty and give historians, family members and others access to the documents and information about the victims' fate. 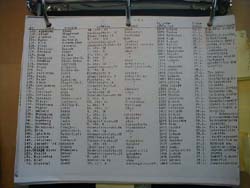 The decision will be taken by consensus, and any one of the nations could block the opening. An agreement would still require the approval of parliaments in several of the countries. Berlin will work with Washington on opening the files, a major stride toward making the material public, German Justice Minister Brigitte Zypries said at a news conference Tuesday at the U.S. Holocaust Museum.

Until now, Germany has resisted, citing privacy concerns. Even while using mass murder to try to eradicate European Jewry and others they considered inferior, the Nazis kept scrupulous records of their work. As a result, the records can illuminate the fate of victims, inform historians and possibly clear a way to lawsuits.

"We still have negotiations to do," the U.S. special envoy for Holocaust issues, Edward B. O'Donnell, said in an interview. "Our goal is to reach an agreement as soon as possible." "We are encouraged," O'Donnell added. Gideon Taylor, executive vice president of the conference on Jewish Material Claims Against Germany, said, "These records have been awaited for years by Holocaust survivors and by scholars of the terrible period."

In Jerusalem , Holocaust specialist Shlomo Aharonson, a historian at Hebrew University , said, "They have shown good will, but that doesn't mean the problem has been solved." Aharonson said the archives are supposed to contain all the names of those who died in World War II, both Jews and non-Jews.

The announcement by Zypries culminated a 20-year effort by the Holocaust Museum , the United States , France , Poland and some other countries to pry open the archives. In a meeting Tuesday with museum director Sarah Bloomfield, Zypries said Germany had changed its position and would immediately seek revision of the accord governing the archives. The process should take no more than six months, the minister said.

Opening the archives would enable many survivors and families of victims of the Nazis to find out with more certainty than ever before what happened to their relatives. "We are losing the survivors, and anti-Semitism is on the rise, so this move could not be more timely," Bloomfield said in an interview. She said the move was "something of moral and historical importance in a critical time."

Germany 's privacy law is one of the most restrictive among the 11 countries, Shapiro said. Remaining safeguards, he said, might limit duplicating a document or prevent using the name of someone cited without the person's permission, he said. Dissemination through the Internet also may be tightly restrained. However, privacy laws of the other countries will now prevail, he said. Most are less restrictive than Germany 's.

For 60 years, the International Red Cross has used the archived documents to trace missing and dead Jews and forced laborers who were systematically persecuted by Nazi Germany and its confederates across central and eastern Europe before and during World War II. But the archives have remained off-limits to historians and the public. The other countries involved Besides Germany, United States , France and Poland are Belgium , Britain , Greece , Israel , Italy , Luxembourg and the Netherlands , reports the AP.