Florentino Cruz, an illegal worker from Mexico , joined hundreds of thousands of immigrant rights supporters in rallies across the United States , holding a sign with a simple message: "The USA is made of immigrants like me." The protests Monday were the culmination of more than two weeks of mounting pressure for federal lawmakers to overhaul America 's immigration policies. 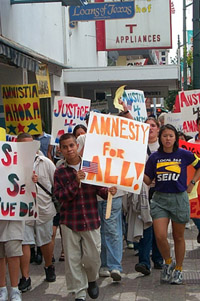 "Before the marches, they only saw us as criminals. Now they are changing, but still not enough," said Renato Cuchillo, 50, an undocumented Mexican factory worker in Los Angeles . Leading demonstrators in prayer, Los Angeles Cardinal Roger Mahony who has emerged as a spiritual leader of the movement called on Congress to hear their pleas.

"We are America , a nation of immigrants seeking a better life," said Mahony, the leader of the nation's largest Roman Catholic archdiocese. Rallies were held from New York and Boston to Houston and Phoenix , to Seattle and San Francisco , and dozens of other communities. There was even a small, but spunky, group in Alaska .

The protests seek to help an estimated 11 million immigrants who are illegally in the United States by influencing decision-making in Washington , D.C. A bill passed by the House of Representatives would crack down on illegal immigrants and strengthen the U.S. border with Mexico . A broader overhaul of immigration law stalled in the Senate last week and lawmakers went on a two-week break. Marchers in Washington walked past the White House, angry that the House bill would make illegal immigrants felons.

More than 80,000 took to the streets in Florida , with an estimated 75,000 people marching in Fort Myers . Many held signs with messages such as: "It is not about politics. It is about human beings. Stop being selfish." "It gives you motivation to keep fighting," said Veronica Ramirez, 19, a native of Mexico City , who has worked in tomato fields since she came to the United States two years ago.

A rally in Tucson , Arizona , was marred when counter-demonstrators burned two Mexican flags and police took six people into custody. Some pro-immigrant groups had urged supporters to roll up flags from any country other than the U.S. At a rally in Seattle , citizens of all colors, ages and backgrounds marched. Signs ranged from the earnest, "We love America and we work very hard" to the teasing, "Who's going to mow your lawn, John?" Mayor Greg Nickels estimated the crowd at 25,000.

There were teenagers with dogs, moms with strollers, classmates marching arm in arm, white-haired retirees in wire-framed spectacles. A sign in Arabic urged "Mobilization for Immigration Justice." "It's the most beautiful day I have ever seen in the United States ," said Gerardo Martinez, a construction worker who came from Mexico to Everett , Washington , five years ago.

"To work is not to break the law," said Javier Cisneros of Seattle , who came from Mexico eight years ago. He and his wife and daughter were among the onlookers lining the sidewalks, many with cell-phone cameras. In North Carolina and Dallas , immigrant groups called for an economic boycott to show their financial impact. In Pittsburgh and other cities, protesters gathered outside lawmakers' offices.

At the Mississippi Capitol, they sang "We Shall Overcome" in Spanish. In Albertville , Alabama , they carried American flags and signs including " Sweet Home Alabama ." In Houston , a crowd of 50,000 people marched, rallied and waved mainly U.S. flags. Nine-year-old Murphy Alvarez used a bullhorn to help lead the crowd as it chanted "Si se puede" or "Yes we can."

"I came here to be part of history and support the immigrants," said the fourth-grader, who was born in the U.S. but whose parents are from Guatemala . " America was founded by immigrants and really the Americans are immigrants." Pedro Cruz brought his 5-year-old daughter to Monday's protest in New York City because he said it was more important than his job at a fish market.

"I wanted to show the Congress I'm not a criminal," said Cruz, a native of Mexico who has lived in the U.S. for 17 years. "I'm just trying to work here, trying to survive." During the march in Manhattan , Korean-Americans kept the marchers company by beating drums. One of the drummers, Grace Nam, 35, who is an American citizen, said she came to lend her support.

"We just need to make our voices heard," Nam said. Damien Halpern, 45, an Irish carpenter who has been in the U.S. illegally for 13 years, said the protesting "is going to change the country." "Things have to change," Halpern said in New York . The protests were even heard in Anchorage , Alaska , where a tiny contingent of protesters waved American flags at passing motorists outside the federal building. Ludi Zamudio, who works at the Alaska Immigration Justice Project, said it was important to show solidarity. "Even though we're far away, we can still support them", reports the AP.