Upcoming hurricane season likely strong, but not like record 2005

A top hurricane expert said Thursday that this year's hurricane season is likely to be stronger than average, though short of the record 2005 season, the costliest on record. 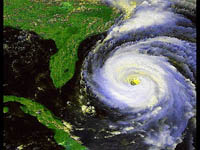 Upcoming hurricane season likely strong, but not like record 2005

"It would be an unbelievable record to have another season like that, that's just not very realistic," said Max Mayfield, director of the National Oceanic and Atmosphere Administration's National Hurricane Center.

But he warned that this year's hurricanes season, that officially begins on June 1, might be stronger than average.

"I think everybody is going to say we're going to have an above-average season here," Mayfield told a news conference at a San Juan hotel, adding: "We don't have the numbers worked out yet."

A record 27 tropical storms formed in 2005, with seven becoming major hurricanes including four that made landfall in the United States.

Representatives of 25 countries from the Caribbean and North and South America met in the Puerto Rican capital on Thursday to discuss hurricane preparedness and sharing data to help improve forecasting. NOAA's National Hurricane Center and its National Centers for Environmental Prediction will release their official hurricane forecast on May 22.

Researchers are trying to better understand storm intensity, particularly after last year's Hurricane Wilma jumped from a tropical storm to a whopping Category 5 hurricane within 24 hours.

D.L. Johnson, director of the NOAA's National Weather Service, said his people are preparing to put up the next generation of weather satellites and want to improve monitoring of upper air currents to help determine where storms will go.

Officials deployed seven buoys in the Gulf of Mexico, the Atlantic Ocean and the Caribbean Sea in 2005 to collect data to track hurricanes. Eight more are scheduled to be dropped into the Caribbean next year.

The region has experienced strong hurricanes since 1995, due in part to warm sea surface temperatures, participants said.

"We need to remember that the research community is telling us that we are in this active period for hurricanes that may very well last another 10 to 20 years," Mayfield said. "And that's not good news for this region."

The first tropical storm of the 2006 season will be named Alberto, reports AP.