With a meager budget and little modern technology, this poor Andean nation's military does not amount to much. Bolivia 's air force has a few Korean War-era jet fighters but no radar for air defense. Instead, it had relied on about three dozen antiquated Chinese surface-to-air missiles. Until, that is, the missiles were quietly loaded onto a U.S. cargo plane, flown to an undisclosed U.S. site and dismantled by American military technicians. 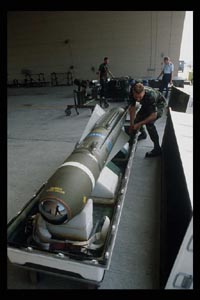 When word of the deed got out, many Bolivians were outraged. Some backers of President Evo Morales denounced the missiles' destruction as a U.S. plot to weaken both him and Bolivia's military, though it preceded by several weeks Morales' victory in Dec. 18 elections.

The political undercurrent in the affair is that Washington has had too much influence in Bolivia 's affairs; the leftists now in charge prefer to keep the U.S. military at arm's length as they move closer toward Cuba 's Fidel Castro and Venezuela 's president, Hugo Chavez.

Morales initially publicized the destruction during last year's campaign, and has kept the issue alive calling for "drastic punishment" of those involved. "There's an interest behind this to diminish the capacity of Bolivian self-defense that was generated in a climate of mistrust of the armed forces by the U.S. government and by uncertainty over the upcoming elections," said Juan Ramon Quintana, Morales' chief of staff.

In a further sign of poisoned relations, the United States decided this month to cut funding to an elite military anti-terror unit after one of the officers who informed Morales of the missile destruction, Col. Rory Rodriguez, was named its commander.

Bolivia bought the Chinese HN-5 missiles in the 1990s. But with a shelf-life of 10 to 15 years, the missiles were by last year unreliable at best and inoperable at worst, according to military experts, adding that they would have been unable to down a modern military fighter jet.

Losing the missiles is more of a psychological blow than anything to Bolivians, said Anna Gilmour, a Latin American defense expert at the London-based Jane's Information Group,

"As long as (the Bolivians) have those Chinese missiles, as long as they're in the inventory they say, 'Look, we have what amounts to a rudimentary air defense, but now they don't even have that,"' Gilmour said. First made in the 1960s, HN-5s are copies of a Russian Strela-2 missile that's popular among terrorists who are looking to shoot down slower-moving commercial aircraft. In its bid to deny them to terrorists, Washington has been offering to destroy such weapons for foreign governments.

In January, the U.S. State Department said that in destroying the Bolivian HN-5s the U.S. government had "complied in good faith with a Bolivian government request for assistance in disposing of outdated military equipment." The U.S. ambassador to Bolivia , David Greenlee, said in January that his country was simply helping with a Bolivian request to deactivate the missiles.

"It's not a question of disarming Bolivia , the missiles were in a very bad state," Greenlee said. Morales' predecessor, Eduardo Rodriguez, says he made the request on the advice of Bolivian army officials who told him they were obsolete and on recommendations from the United Nations and the Organization of American States. He denied authorizing the missiles' departure from Bolivia .

The Bolivian military had long enjoyed a cozy relationship with the U.S. government, but those relations now appear to be deteriorating. While some suspect that Morales will now turn to Venezuela and Cuba for help, Morales himself denied to The Associated Press on Tuesday that Bolivia receives military aid from either country.

In the past, Washington effectively held together Bolivia 's military, paying salaries to mid-level officers, providing scholarships for study in the United States and bankrolling the country's drug-eradication and interdiction forces.

When Washington demanded that the anti-terror unit return nearly US$500,000 (  413,770) in donated weapons over Col. Rodriguez being named its commander, Morales accused the United States of blackmail and refused to return arms that Washington gave to the force.

Meanwhile, the Morales administration is publicly pushing for those responsible for the missile deactivation to be brought to trial for allegedly subjugating Bolivia to foreign control and espionage.

Henry Oporto, an analyst with the Bolivian think tank Fundacion Milenio, sees the investigation against Rodriguez, a popular caretaker president, as Morales trying to take out a potential political rival. "This is a clear example of political manipulation of an act that shouldn't be given such importance," he said, reports the AP.