Kosovo officials met in Albania Monday to develop a minority rights package ahead of their U.N.-sponsored talks with Serbian officials. Kosovo's Consultative Group on Communities, made up of ethnic Albanian officials and representatives of minority groups, were discussing what to present in the next round of talks with Serb officials. 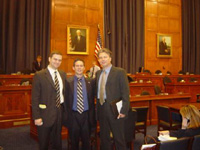 The two sides have held two previous rounds of talks that ended without any clear agreement, but pledged to meet again in Vienna on April 3 to discuss reforms that could give Serbs more of a say in areas where they live. Kosovo has been run by the United Nations since mid-1999, when a NATO air war halted a Serb crackdown on separatist ethnic Albanians fighting for independence, and forced Belgrade to relinquish control of the province. Kosovo officially remains a province of Serbia.

The U.N.-sponsored talks in Vienna are an attempt to resolve the province's future status. Ethnic Albanians, who comprise about 90 percent of the population of 2 million, insist on full independence. But Serbia, and Kosovo's Serb minority, say Belgrade must retain some control. "The Serb presence, as an important part of this dialogue, is a new factor," said Veton Surroi, the Albanian coordinator of Monday's meeting, held in the port city of Durres, 33 kilometers (20 miles) west of Tirana, the Albanian capital.

Oliver Ivanovic, the representative of Kosovo's Serb community, said his delegation was "interested in Pristina's stand and how much they will take Serb problems into account in the Vienna talks." He reiterated Serb complaints about unemployment and the lack of free movement for the community in Kosovo.

Philip Goldberg, the top U.S. diplomat in Kosovo, and a representative of the European Center for Minority Issues, a Germany-based think tank, were also taking part in the meeting, said a statement from the Ora political party, which coordinated the gathering, reports the AP.