A Chinese woman has been sentenced to 15 years in prison for brokering the sale of newborn infants, a newspaper reported Thursday. 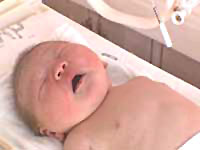 Li Xiulian acted as an agent in the sale of eight babies, five of whom have never been recovered, the Shanghai Daily said. Li earned a profit of up to 1,000 yuan (US$125; Ђ 104) from each baby sold, the paper said.

Most of the infants were born in violation of family planning rules that limit most couples to one or two children, the report said.

The paper didn't identify any of the buyers, although the traditional Chinese urge for male offspring to carry on the family name prompts some Chinese to illegally purchase boy babies to act as their own sons.

The country's strict birth limits are blamed for encouraging such practices, although Chinese officials say the policy has been vital to holding down population growth and combating poverty.

Along with babies voluntarily given up or sold by their parents, some infants are abducted from their parents and in some cases sold to welfare homes and later adopted by foreign couples.

Ten people were sentenced last month to up to 15 years in prison on charges of selling at least 78 babies, some of them abducted.

Thousands of babies are sold or abandoned every year in China, most of them girls born to unmarried mothers or poor families, reports the AP.