French President Jacques Chirac said Tuesday that Europe cannot make "the slightest concession" to Iran on regulations governing the nonproliferation of nuclear arms, but stressed it does not contest Tehran's right to civilian nuclear energy. 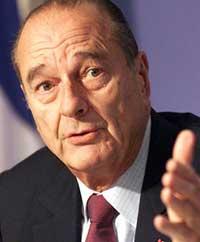 France , Germany and Britain have led European efforts to defuse concerns over Iran 's nuclear program. However, they declared talks at a dead end in January and the issue is now awaiting consideration by the U.N. Security Council.

"We have a cohesive action among the three European countries, which are doing the maximum to understand the position of Iran ," Chirac told reporters after meeting with German Chancellor Angela Merkel.

The Europeans "do not contest, naturally, the absolute right of Iran to master and develop nuclear electricity, civilian nuclear (energy), but cannot accept the slightest concession as far as the nonproliferation rules are concerned," he said.

He added that they would stick to that point "hoping that the discussion will be able to reach an accord that is acceptable for both parties."

Britain and France , backed by the United States , have proposed that the Security Council demand Iran abandon uranium enrichment and adhere to its obligations under the Nuclear Nonproliferation Treaty, reports the AP.